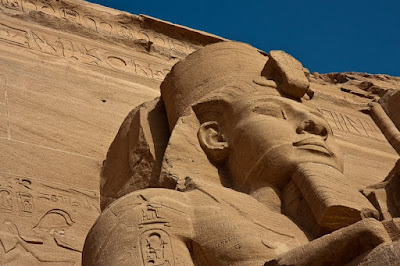 After our Nubian dinner we went to bed early because we had to be up at 3:45am to catch our 4am convey through the desert to Abu Simbel. It was a three-hour drive so we borrowed our hotel pillow to accompany us on the journey.  Abu Simbel is a pair of temples built by Ramsees II and is a monumental site in two ways. 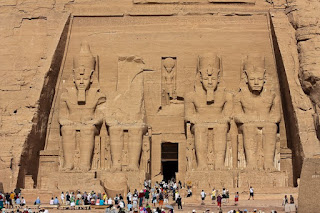 First, the engineering and scale of the main temple is just mind blowing. There are four grand statues of Ramsees himself at the entrance that lead to a corridor lined on both sides with more statues of Ramsees, smaller but still larger than life. Finally the temple's alter room which has three seated gods and Ramsees that are magically only fully lit up by the sun coming through the doorways on one specific day of the year. Sorry no photos allowed inside the temple so here is article with some interior photos. 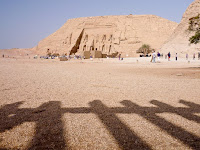 Second, the temples were actually moved from their original locations.  Every piece was meticulous cut up and moved in preparations of building the Aswan dam which was needed to help regulate the Nile floods.  You can see the new lake behind me in the photo that covers the original site.  They even built a fake mountain to house the temples as it originally was designed.  Seeing it on TV, you would have no idea it was moved and actually in person, it is only apparent in certain places. Regardless, it is impressive that they moved this massive monument and were able to do it with such precision. Oh, and the second temple for his queen, Nefertari, is nearly as impressive – he must have loved her although he does make quite a few appearances in there as well.

It was also a good thing that we were there so early in the morning, because if I hadn’t mentioned already, it was scorching hot in Aswan and there is no hiding from the sun at the site. Jumping back on the bus was a relief, saving the hottest part of the day for the bus ride.  One convoy back to Aswan please.

At this point in our trip our efficient packing starting to take its toll…yep, we needed to do laundry. That was the first priority when we got back from Abu Simbel. Fortunately with the hot, dry heat it was perfect laundry weather!

After laundry and a quick nap, we headed to the local bazaar to entertain ourselves. It was a long, winding bazaar and and all the shops are all full of the same stuff. At one stall we meet a young boy named Mohammed, who was very persistent and spoke English well. He followed us for the next hour or so, as we were in and out of shops, trying to sell us bookmarks. After he got the hint that we weren’t in the market for bookmarks (and that we weren’t simply going to give him money-for-nothing) he proceeded to try and get us to go to his Dad’s shop which we finally agreed and took a look in his shop called Nubian smile. The quote of the day from the bazaar was, “What you want lady” as Steph got that a couple times as she looked at some tunics. Oh and good luck with the bookmarks Mohammed.

After touring the bazaar and not purchasing anything we retired early in preparation for our felucca sailing the next day!

One final photo of Aswan at night.  Check out the light trails to see the crazy drivers of Egypt.
Posted by Unknown at 7:38 PM