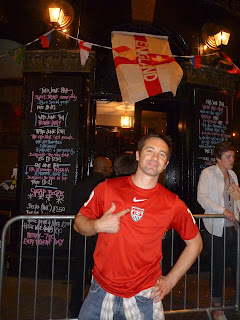 We survived the pub for the England and USA game last night and what an atmosphere!  We met up with a friend of mine, Sam and his friends, all England supporters, at Bar Kick in North London.  We weren't the only Americans but were still a very large minority as you would expect.  Lots of England jerseys, faces painted and even a world cup horn to add to the ambiance.

As time inched toward kickoff, the already jam packed pub somehow found room for more and more excited fans.  During the pre-game show everytime the US team or US fans were shown, loud and rowdy boo's rang out and thunderous England chants ( chanted "ENG-GA-LUND" ) and cheers circulated when their players and coaches made an appearance.  Meanwhile varying England supporters would tap us on the shoulder to find out what we thought the outcome of the game would be.  Victory to the USA of course! 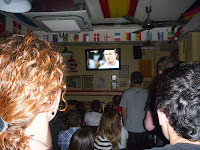 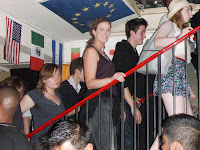 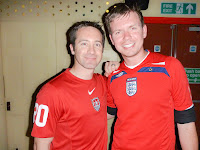 As the game kicked off the place was electric.  Months of waiting, the game was finally here.  I can still remember the headline in the paper.  England have an E-A-S-Y group ( England, Algeria, Slovenia, Yanks)!  Game on!  The time for friendly banter over, it was time to get serious.

Crammed into the pub, standing shoulder to shoulder with the enemy and a good view of the TV, we reservedly cheered on the red, white and blue.  A few minutes went buy when the broadcast suddendly cut to a commercial.  What?!  15 seconds or so later it was back on and loud boo's quickly turned to joy as everybody realized England had scored sending the pub into a frenzy.  Everybody exploded with cheers, high fives hugs and beer thrown into the air soaking the crowd.  For us what a sinking feeling with nowhere to hide!

For the rest of the game we were a nervous wreck.  A lucky break gave us a chance to celebrate with a little USA - USA - USA chant but for the most part it was constant nail biting and heart pounding.   In the end, we were happy with the result although the England fans were disappointed.  Luckily it wasn't disappointment from losing, just disappointment in their goalie, so everybody remained friendly the rest of the night.

Now let's just hope both teams get through the group stages.
Posted by Unknown at 10:19 AM