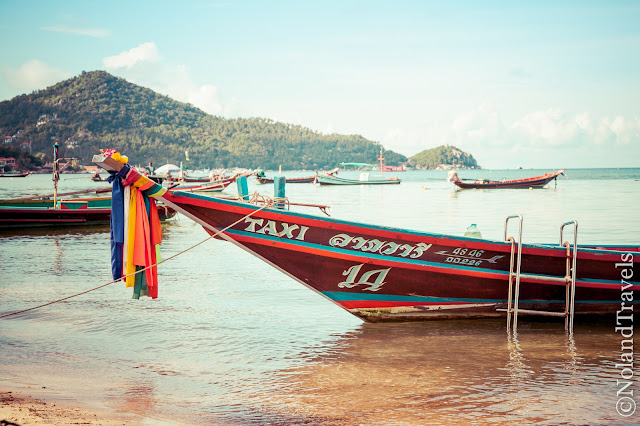 We spent February moving across Borneo, Brunei and over to mainland Malaysia.  Thailand was calling so on March 1st we flew from KL to Surat Thani, Thailand – a port town and the jumping off point to catch a ferry to one of three amazing islands off the East coast of Thailand.

In doing our travel research we came across a set of islands in the Gulf of Thailand that caught our attention.  We wanted to soak up the famous Thailand beaches along with putting our newly acquired diving skills to use.  When making decisions on where to go we generally look for places that are laid back and a little less travelled.  So, when we read about the following 3 islands which one do you think we chose? 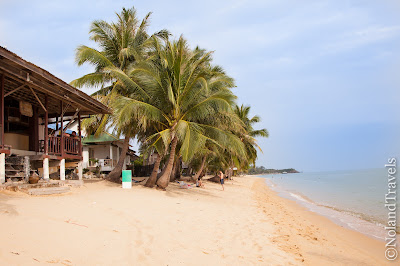 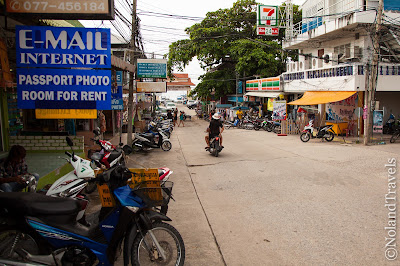 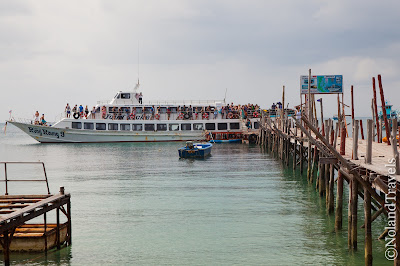 • Koh Samui: Crazy beautiful beaches, “once THE destination for paradise sands fringed with palm trees but development behind the beach is extensive and often thoughtless”.  There are however pockets of less developed areas which attract a backpacker crowd.
• Koh Pha Ngan: “In recent years, backpackers have tended to move over to Koh Samui’s little sibling”, still a simple atmosphere, dense jungle inland and home to the infamous Full Moon parties.
• Koh Tao: “Forty kilometers north of Koh Pha Ngan, small, forested Koh Tao is the last and most remote island of the archipelago”, beautiful beaches, rocky coves, famous for beach bungalows, blessed with a rich marine life perfect for diving.

It wasn't a big deal because it allowed us to spend a night on Koh Samui where along with a picturesque beach bungalow (Shady Shack) we found our thus far elusive, but first of many, Penang Beef Curry.  It. Was. Awesome.  The next morning, we walked down the beach to the ferry port and caught our ride to Koh Tao.

Some travel decisions come easier than others...case in point:  I mentioned it was March, right, well in Kentucky this is almost a religious month while basketball is in full swing.  This year was even more special because the Big Blue were favored to win the championship.  So, when our guide book listed several reputable diving companies and we saw the name “Big Blue Diving”, the other options didn't even matter – if we were going to be on Koh Tao while the Cats were playing in the NCAA tourney then we would have to be staying and diving with Big Blue.  Josh happily agreed! 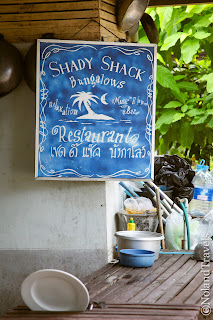 Koh Tao is the equivalent of a diving mecca for backpackers.  They certify more divers here than any other place in the world thanks to a beautiful underwater world and wonderfully cheap prices.  It is a revolving door timed to the ferry schedules but the services are excellent.  All of the diving companies offer pick up services from the ferry and Big Blue Diving was no different.  We happily piled in the truck converted to a mini-bus for a bumpy ride down the pot-hole ridden roads. The island really only has one main road that goes through small sections of development and areas of forest.  Arrival at the resort was a bit of a horse-and-pony-show; they were clearly one of the major dive companies and have people coming and going every day.  The initial hustle and bustle was a bit of a turn off but we stuck it out, landed a great diving package to get our Advanced Open Water certifications and a simple room twenty paces from their beach restaurant which boasted a gorgeous view - all at around 30 dollars a dive including lodging.  Score!

The next morning we had out very first dive, which ended unexpectedly.  At this point we were still getting the hang of diving with only a few dives under our belt and I was still not fully confident. About 20 minutes into the dive my mask started to leak which is something you are trained to deal with.

We were down about 18 meters (60 ft) and it was leaking so much that I was just constantly clearing it.  The first rule of diving is STAY CALM which initially I did.  I notified the instructor and he came over to help but we couldn't get the mask to stop leaking.  This started to make me nervous and I wasn’t confident enough to do the underwater mask switch so I gave the thumbs up and asked to surface.  Still fairly calm, the assistant instructor started taking Josh and I to the surface where we stopped on the buoy line to do the normal safety stop.  I was ready to be at the surface and this is where things started to unravel. 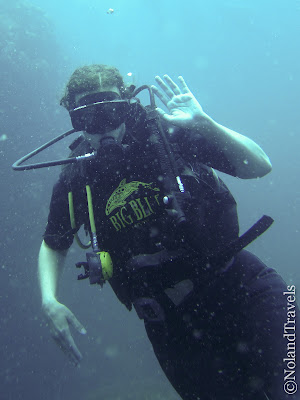 There was a crowd of people holding on the line above me and the line was bouncing back and forth heavily with the surge.  That only made my mask leak more and in trying to clear it one handed (while holding the line) while being jerked around I started getting water in my breathing regulator.  In studying for our Open Water, it talked about the “wide open eyes” of a diver panicking.  I no doubt had those eyes at this point and Josh was watching me intently trying to see what I needed.  There is no hand signal for “water in my regulator, I’m trying to breath as shallowly as I can, while not panicking, so as to not swallow water, but with each breath its getting worse and now I AM panicking."  There was no remaining calm now and the surface was only a few swift kicks up.  So I did what I knew was safe to do – I gave Josh the “up” signal, let go of the line and began to surface as the assistant instructor went to grab my kicking legs.

It was one of those scary, hand above my head ascents where upon surfacing I spat out my reg and ripped off my mask and coughed and gasped for breath.  I had definitely been drinking a sea water cocktail!

Your heart may be racing a bit but honestly, I think that was the best thing that could have happened to me early on in my diving.  Recreational diving is taught to be as safe as possible and we were never out of the bounds of safety   Even at 18 meters, I could have slowly ascended straight to the surface without a problem.  So, what happend?  It turned out the mask strap had slid up high on the back of my head so kept the mask at an angle which let in water.  I hadn’t really felt the back of the straps; I had only been trying to tighten it which may have made it worse.  At the time I couldn’t understand why water was in my reg while holding the line, but I figured it out the next day.  The jerking of the line was also jerking my reg and I didn’t have a strong enough bite thus letting water enter.  Finally, my “emergency” ascent – well, it was completely safe.  Based on the depths you’re allowed as a recreational diver you shouldn’t ever actually have to make a decompression stop – we all just do it for extra safety.  And the speed at which you ascend should be slower than your smallest bubbles, which it was.  I did look up to ensure I was coming up safely too.

Having had that minor mishap actually made me feel much more confident in the water.  I practiced letting water in my mask and will probably still practice it before the next time I dive.  I think a lot of my issue was the residual fear from when I used to wear contacts.  If I lost my contacts I would have been blind as a bat and really freaked out.  But thankfully, I’ve had my eyes fixed with ICL (implantable contact lenses) so I can start to let go of that fear.

I recovered and really enjoy diving and thus far haven't had any more incidents.  Diving is surreal and we had only just begun! 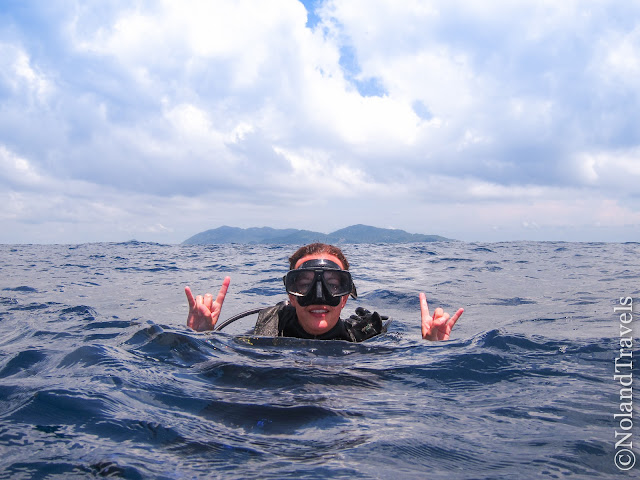