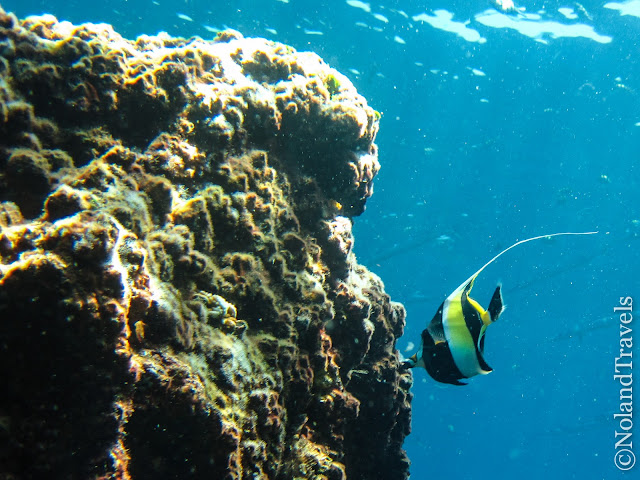 Richelieu Rock was the most famous of the dives sites on our liveaboard trip.  Jacques Cousteau discovered this horseshoe shaped reef, near the coast of Burma.  It is well known for its purple corals and incredibly diverse and abundant marine life.  Having heard all the talk leading up to our first dive here, we were unsure what to expect.  Could it really be better than what we've seen already?  What makes it so special?  Well, we were about to find out. 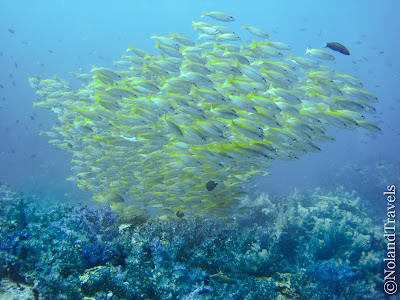 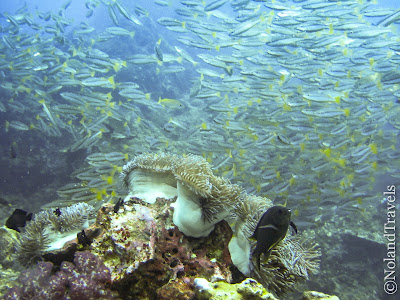 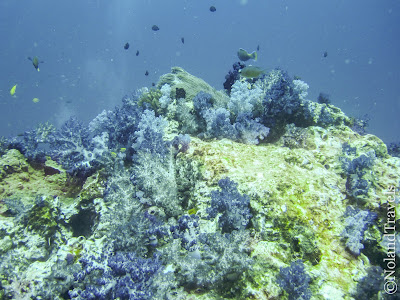 Josh had been joking with our dive master, Neil, that he needed to "find" us a juvenile angelfish. We were anxious to see this little beauty that carried the vibrant colors of royal blue, white and black.  Neil had been pretty good about "finding" other fish for us but he was less confident about this one - they are elusive little guys - but he said Richelieu Rock was the best chance.

We jumped in the water from the dive deck and our group made the descent into wonderland...immediately upon going under water the dive site was in view.  The visibility was spectacular and the waters were alive with movement of little creatures.  The whole site had an incredible glow of purple from the abundant amount of soft purple corals.  I think we all felt like kids in the candy store as our eyes darted around not knowing which beautiful aspect to admire first.

As soon as we made it to the bottom Neil was already turning back to Josh and swinging his cradled arms in front of him then drawing a circle around his head - dive language for baby angelfish!  Score!  We all gathered around to look at the stunning fish about the size of your palm.

I was so excited and immediately began trying to take pictures as he was swimming near a small patch of coral.  My first attempt at closing in on him was too fast and with everyone else around I had to go forward and come back around for another approach.  I waited for the others to have a look and then steadied my hands on the camera, breathed slowly to control my bouyancy and softly flipped my fins to approach the shy fish as he had moved over to the base of a large wall of coral.

I took several careful pictures and was admiring his beauty. I smiled mentally (cause you can't really smile with a regulator in your mouth) and turned around because I was sure Josh was relishing this little guy as much as I was.  But there was no Josh.  There was no one! 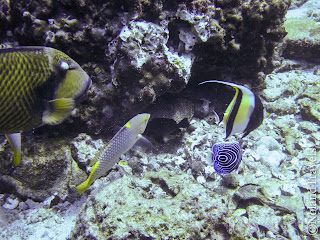 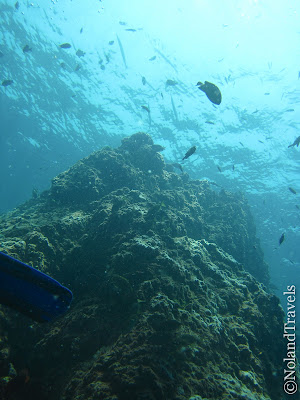 I backed away from the wall and looked around - my group was gone!  Oh crap!  Rule number 2 of diving is to always stay with your buddy (Rule number 1 is to never hold your breath, in case you're curious).  Even in our short diving careers we had already established the normal attitude of being frustrated with people who wander off from their groups - it can cause dives to end early if you can't quickly reunite.  We were at Richelieu Rock and I was lost!  Although I firmly believed that Josh had left ME, I definitely didn't want to be the reason our whole group had to surface early at such an epic dive site.

So, I looked around in the distance.  Thanks to the brilliant visibility I spotted our group in the distance over a coral ledge.  I quickly swam across the expanse and as I neared I realized it wasn't my group.  Double crap.  I turned around and looked again.  I saw another group up to the right, but that wasn't them.  Then I saw a group from our boat.  The dive master knew what was up and made the "buddy" sign at me and I had to shrug my shoulders in reply.  She motioned for me to join her group but just then I saw our group in the distance.  I pointed and motioned I was off and she waved goodbye.

As I approched that group, again, across an expanse, again, I realized it wasn't them.  Oh no!  I just sent that other group on their way!  Just as I was about to really have to consider surfacing, standard procedure when you are lost for more than 1 minute, Neil, Josh and crew all emerged from a narrow split in the corals off to the left.  SAVED!

Josh and I both did the "where the heck did you go?", "why the heck did you leave me" shrugs, motions and wide eyes at each other.  Neil just looked at us both and gave us the buddy sign.  Gotcha.  Won't happen again.

Come to find out Neil was racing to be the first at the sea horse hangout.

The rest of the dive was unbelievable and we all stayed together. It was the most exciting dive we had had to date and not just because I got lost!  At the end of the hour, our group surfaced all grinning ear to ear.  And off the back of the boat was Richeilieu Rock just breaking the ocean surface.  You would never know what an exciting world sat beneath that simple set of rocks! 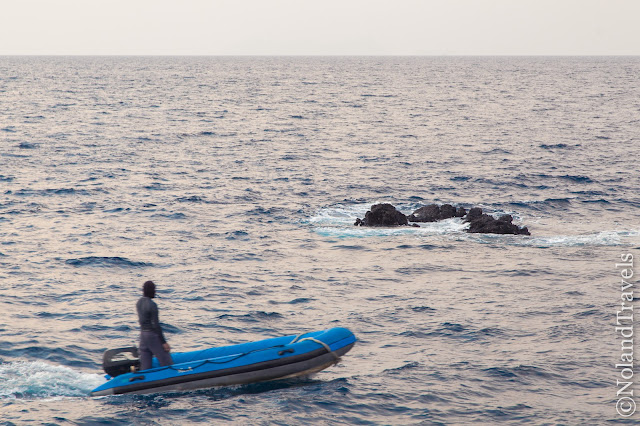