You're not a man until you climb the Great Wall... 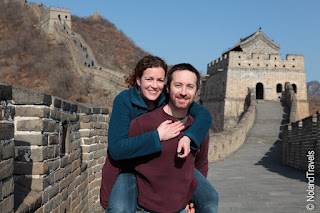 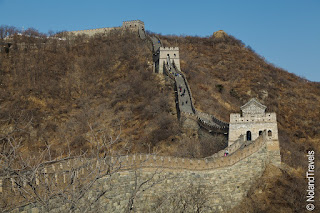 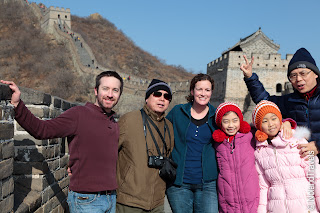 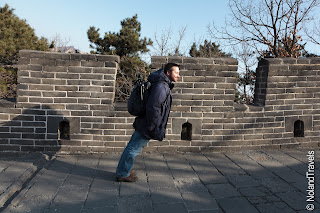 ...well, I couldn't have that, so we booked an excursion out of Beijing to Mutianyu, to visit a section of the Great Wall.  This portion of the wall was originally built in the Northern Qi Dynasty (550 – 557) but a major portion was rebuilt by the Ming Dynasty (1368 – 1644).  You can explore a nearly 2.5 km stretch while traversing big inclines as you make your way from watch tower to watch tower with the wall winding its way across the top of the mountain.

Although its set in rugged countryside, surrounded by mountains and forest, this place is by no means a secret due to its proximity to Beijing.  There is a cable car to take you up and down and for the more adventurous, there's an exciting toboggan ride down!  Yeah...of course, we took the toboggan!
We ended up with a fantastic winter day to explore the wall.  The sun was shining, the wind was calm and the skies were blue, which only added the awe of seeing the Great Wall.  However, you quickly realize this isn't a causal stroll in the park.  To cover a lot of ground it's daunting!  The wall sits high up on a ridge of the mountain, so of course it follows the natural terrain.  You start walking - scaling the inclines, staggering down the declines, climbing the uneven and at times gigantic steps, which only lead to more and more of them.  Up, down and around you go, following the path laid for you so many years ago.  It was surreal.  Thinking of the old school Chinese guards on patrol, standing watch and occupying the houses, along with coming to grips with how small a portion of the wall you were actually seeing.  Mind boggling!  Then as we found out in Mongolia, it didn't even work!  Ghengis Khan found a way around this great structure to take Beijing, its primary reason for being built.
Anyway, we climbed our fair share of the wall making it to gate 14 when we spied the seriously l-o-n-g uphill climb to gate 23 and decided the view was much better from below!
Other than hiking and enjoying the crisp beautiful day, we did make some new friends as you can see in the photos.  And there's photographic evidence that I did indeed climb the wall.  Whew - my manhood is safe! 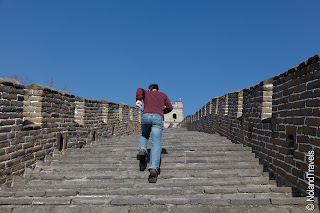