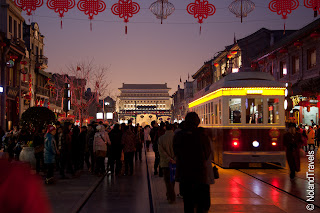 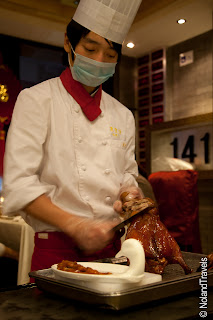 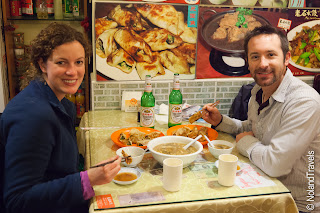 It's officially the year of the Dragon - 2012!  The fireworks are still sounding in the city.
Chinese New Year or 春節, translates as "Spring Festival" which is the most important holiday of the year.  There are family feasts on New Years Eve, traditions of giving lucky money to kids, burning fake money, dragon and lion dancing and of course fireworks!  The festival ends 15 days later culminating with the Lantern Festival.
By fireworks, I don't necessarily mean  big organized shows.  Families set them off at their doorstep to drive off the evil spirits and start the new year with good fortune.  All throughout the day you could hear zips, bangs and other firework noises in all parts of the city.  At times you'd be walking down the street and here a big CRACK.  Turning around you see a kid holding his ears after just setting off a firecracker.  In the couple hours leading up to midnight on NYE it sounded as if the city was under siege - a constant rumble of explosions all around you!
Along with the festivities, we have been sampling some of the local cuisine including dumplings and peking duck!
Dumplings are a New Years tradition and we found a fantastic little dumpling restaurant called Mr. Shi's Dumplings.  We ordered two plates of dumplings and two soups, but they quickly said, no, no to the second soup.  We understood why when they served us what seemed like a gallon of Hot and Sour soup!  For dumplings fillings we opted for mutton and carrot along with pork and fennel - both were delicious.  And Mr. Shi even took our photo.  A great find!
The other big ticket food item to have in Beijing is Peking Duck.  With the help of a guilde book tip we stumbled into Bianyifang's to try their version which they have been perfecting for 150 years!  Before we could order though, we had to have a look through their extensive menu of Duck foot with mustard, wine drunk duck heart, braised sea cucumber and pigs blood and oxtail soup, to name a few!  We settled on the standard Peking duck with pancakes, cucumber, spring onion and hoisin sauce.  To enhance the experience, a chef came out and carved the duck at your table.  We polished it off nicely!
In between New Year's festivities and eating we are making it around to the sights and look forward to visiting the Great Wall on Friday.  We got a glimpse of it on the train when we arrived but can't wait to see it up close.
Now for some housecleaning...
We have lots of content to post but we are having internet issues.  Email is sketchy at times and the blog is er, um, BLOCKED!  Blogger is apparently off limits, along with other favorites like You Tube, Twitter and Facebook.  So, I'm trying a new approach, blog by email so we will see how it goes - the formatting may be a little off.
Oh, but I can access Flickr, so keep an eye on it for some of the latest photos -> http://www.flickr.com/photos/nolandtravels
That's all for now.  Happy travels.
Posted by Unknown at 9:48 PM