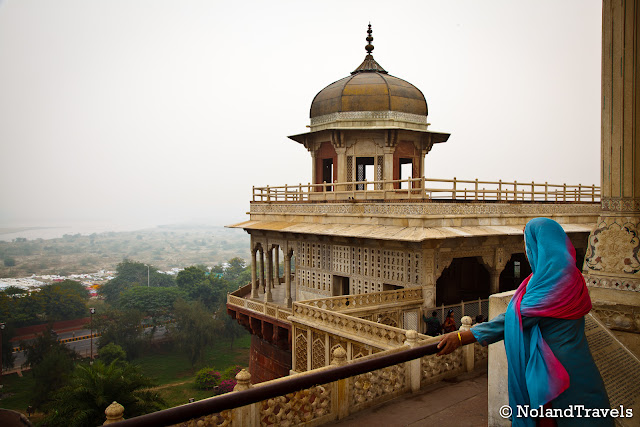 Fresh off the 12 hour overnight train from Varanasi, the sights and sounds of Agra awaited.  You may or may not have heard of Agra may but it is home to 3 World Heritage sites, Fatehpūr Sikrī, Agra Fort and the granddaddy of them all - Tāj Mahal.  Unfortunately, we only had time to see the latter two.  First up, Agra Fort, saving the Taj for an evening visit when its supposedly at its most grand. 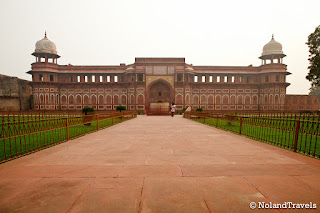 The Agra Fort was first mentioned in the history books around 1080 AD and many of the most influential Mughal Emperors ruled from here.  Its a stronghold fort but also a royal palace.  At one stage, the government was even run from the fort.  The fort complex is huge and mainly made out of sandstone.  Two of the bigger names to live here are Akbar The Great and his grandson Shan Jahan (who built the Taj).  Akbar expanded the palace and loved the red sandstone.  Shan Jahan on the other hand favored the white marble which he started using instead.  Later on there was a lot of family drama and Akbar was locked in the fort where he ultimately died.

We hired a local guide to try and get an interesting perspective on the fort.  The name of the game here is haggling.  They quote some huge number and you say no walking away until finally they get reasonable and you choose who you like best.  Our guide would be Aziz, an older gentleman who claimed to have 30 years experience. Touring the site we learned about the various rooms including an air conditioned room that had hallow walls that would be filled with water to cool the room.  The fort has such a mix of Hindu, Moghal, Muslim and other influences.  There are ornate carvings and paintings along with amazing stonework and grand views.  The local guide did give us some good gossip though - telling us that due to the size and complexity of the layout of rooms in the fort, Akbar would play hide and seek with his 300 harem girls!

Before going to the fort, we had read that we might get our first glimpse of the Taj from a lookout in the fort...if the haze wasn't too heavy.  The haze in Agra can be thick, so said the tourbooks and our guide.  Its a mix of normal haze but getting worse and worse due to the huge pollution problem in the region.  There are numerous factories nearby that are having a detrimental impact.  So much so that it is even damaging the marble on the Taj turning it yellow.  Basically, it turns into acid rain settling on the marble with an unrepairable effect.  To counter act the effect, the government tried to do some refurbishment but with limited effect.  One big change in recent years is that area around the Taj is now restricted to electric powered cars to limit the pollution.  A small step in the right direction, but still clearly not enough!

Below is a photo from the lookout towards the Taj Mahal (first photo on the left) and then the same photo after heavy digital processing.  You can see that, in fact, the Taj is there through the haze!  Lets just hop that burns off later in the day.

While enjoying the "view" we were suddenly swarmed by a big group of Indian tourists.  Nothing out of the ordinary until 3 young guys asked to take a picture with me.  Well that was all it took, one yes from me and 25 minutes later we were still taking photos with other people.  Group photos, kids photos, even adults wanting photos.  I told you we were famous :) Steph found it particularly strange being a woman - as women wanted her to put her arm around their shoulders or when sitting, they would hold her hand or put a hand on her leg.  With men, it was quite the opposite - they wanted a photo with her but when sitting there was a clear divide of space between them! There were a lot of hellos, hand shaking and awkward posing with strangers but hey, its cool to be a celebrity for a few minutes. 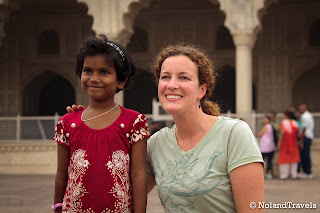 One final note about the fort, they had a lot of wild parakeets flying around.  You know the bright green ones we always only see in cages.  They were quite stunning, seen in stark contrast against the subtle red sandstone.  Cool.

After the fort we had some time to kill and wondered down the street to pick up some lunch and hit up an Indian sweet shop.  Walking down the road, being an obvious tourist, can be exhausting!  We were always approached by rickshaw drivers and one even followed us for our whole walk to the sweet shop!  He finally gave up when we went inside.  Having no idea what any of the sweets were, we created our own sampler pack.  We ended up eating half the box and gave the rest away.  Some were yummy but others, eh, not so much.  I think it was the saffron in some of them that turned us off.  Plus some of them are not so sweet.  Oh well - always worth a try!

We rested in the hotel room for the remainder of the afternoon, awaiting 3pm when we would depart for the Taj!

Agra Fort Photos
Posted by Unknown at 10:51 AM