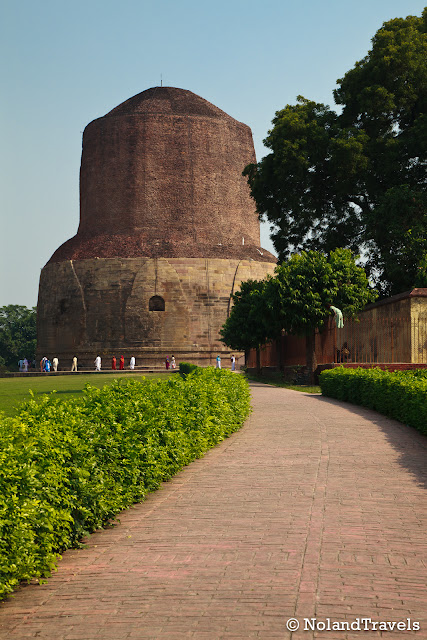 Today was a free day on the itinerary and one of the suggested optional extras was a trip to Sarnath - where Buddha gave his first sermon to his five disciples.  The trip would about 10km outside Varanasi by Auto Rickshaw.  Most of the group was interested in the trip so we all agreed to share rickshaws and hit the snooze button before meeting mid morning.  With the pace of the trip so far we all relished the idea of sleeping in and having a leisurely breakfast.  In doing so we gave the auto rick shaw drivers a pleasant surprise when all of us left the hotel at once needing 3 tuk tuks.  Tourist Jackpot! 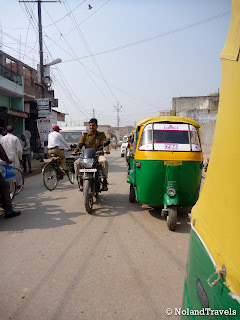 However, we had a plan!  Before leaving the lobby we all agreed on how to negotiate thanks to a little pricing help from our  tour guide.  We all asked for a return journey and successfully negotiated a fair price.

I had it easy because Josh had made friends with a driver yesterday (going to the train station) and that driver was there, smiling and happy to see us as we walked out.  All that we had to do was negotiate a price which was much easier with repeat business.  Since he was the fastest, we had another plan - a race! 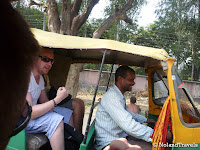 Ben and Nora were in another rickshaw and as we left we agreed with the drivers that the race was on.  And race they did!  Our rickshaw was in the lead most of the time but the other driver did his best to pass us, even taking side streets and not stopping for rough patches of road catching a little air.  Quick starts and tight turns kept us all entertained (and a bit scared) throughout.  In the end, we won!  Our driver, as marketed, had a newer, faster auto rickshaw.  Que evil boisterous laugh, Wahhhaahaa....

On site at Sarnath, we set our meet up time with the driver who gave us a few pointers and  directions to the attractions.  The site was very much a ruin - with only footprints of many of the old buildings.  However, the great Dhamek Stupa (DOME) was still intact and impressive.  More interesting however, was the museum at the site.  It has the original sculpture of The Lions at Sarnath - one the national symbols of India.  Neato.

After visiting those two sites, our driver being eager to please, offered to take us to 3 temples nearby as well.  Much like Lumbini, several countries built Buddhist temples in the area - our three were built by Tibet,  Sri Lanka and Japan.  All very unique and stunning.  We had a good time in the Tibetian temple - Josh, Ben and I went in one of the prayer wheel rooms and a nearby monk was saying you had to spin it 7 times.  Now, this is a big wheel maybe two stories tall.  You have to grab hold of the handle and walk it around 7 times.  So, we took off counting each lap 1, 2, ... 6.  For the last lap we kicked things into high gear speeding up and yelling 7 as we went around.  At that very moment something loudly went DING!  In our flurry, we looked at each other stunned!  What was that!?  Hang on what!?  Whoa!  How did, um, it know we went around 7 times?!  We then recruited a friend from our group to do the same.  She took the prayer wheel around and we carefully studied it to see what was happening.  Finally, we realized there was a lever at the top to ring a bell each time it went around.  But you had to be going fast enough to give the lever enough power to fully ring the bell.  We just happened to make it finally go fast enough to ring the bell on the last lap.  Whew!  Mystery solved.

Some of you might ask about the red gate photo with what looks to be a dark 20th century symbol.  Its actually highly used in Hinduism and Buddhism dating back to the bronze age but was stolen for other purposes, shown tilted on a 45 degree axis.  This is another example of interesting things you learn while travelling - you really have to keep an open mind because your reaction or understanding is based on what you're exposed to during your lifetime leading up to that moment.  These eye-opening experiences are one of the reason we love to travel.

After we had our fun, we asked our driver to take us to a grocery store near the hotel.  We were following another auto rickshaw with other friends in it when we went past our hotel, turned right, then left, then right, the straight, then left and stopped at a random unmarked door.  As we were starting to get out we realised they had taken us to a silver shop.  Okay buddy, no, no!  We had to laugh and sternly say no thanks, take us to the grocery.  So, he turned his auto rickshaw around and took us straight down that same road to end up back at our hotel.  Hang on....that was just one road to this shop.  They obviously tried to make the shop seem like a hidden secret but when we showed no interest he just took the easy way out.  haha!!

We bought our driver a Coke for being his friendly self and loaded up on some goodies for our overnight train ride to Agra!  Time to gear up for the train ride...they don't have the best reputation. 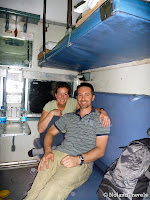 The train station was full on!  We all had our big backpacks and had to walk rather briskly through a manic crowd and find our train car.  Due to the trains being quite full, Josh and I were the only ones in a different car than everyone else...but that wasn't necessarily a bad thing as we were actually in a higher class!  Inside the train things settled down.  We had half of a compartment, each getting a fold down bunk with fresh linens - a pillow, 2 sheets and a blanket.

We met a Norwegian couple in the bunk next to us and did a little photo talk.  They were Canon people too!  After hearing them talk about how they rushed to the station without buying any food and watching them eat some random fried thing from a vendor walking through the train - we decided to share one of our hotel take-away pizzas with them (as were actually full anyway from our last Butter Chicken and Paneer Butter Masala lunch, again!).  Shortly thereafter, we called it a night, chained our bags to the bed and pulled the curtain closed to try to enjoy err get a few hours of sleep before Agra!

Sarnath Photos
Posted by Unknown at 3:00 AM