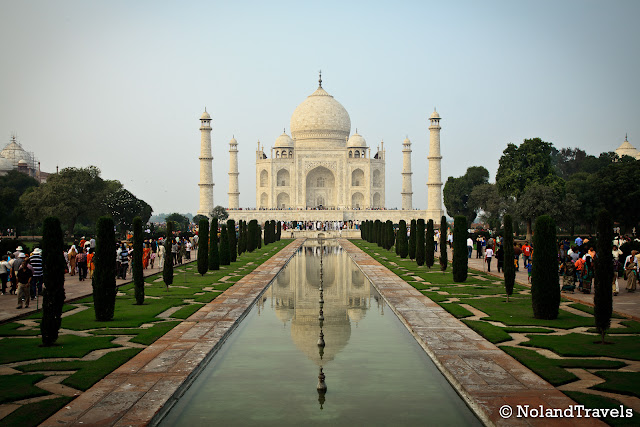 So where to begin? It's the Taj Mahal and it IS as spectacular as you might think!

Counting down the days to the trip, this afternoon's itinerary was circled in red ink. But why? I know its one of the most famous buildings in the world so what exactly is it? The Taj Mahal is a mausoleum built by Shah Jahan in memory of his third wife Mumtaz Jahan who died during child birth of their 14th child. However, just before she died, he promised to build her the world's most beautiful mausoleum. Well, I think he succeeded!

The security on the site is fairly strict - you're only allowed to enter with a camera and your wallet - no bags, no drinks, etc.  They actually give you one bottle of water with your ticket.  A lady in front of Steph had her small purse checked and the female guards were questioning a little decorated lipstick case.  They kept turning it over and over and looking at it...finally, the lady (a tourist who probably picked that up off a local street vendor) just said the guard could keep it.  They smiled and let her through which is probably what they wanted anyway. 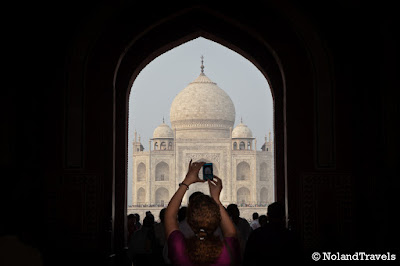 Entering through a huge gate you are welcomed with the view below. As you probably guess the view doesn't usually come built in with a Steph, but in this case, I think she adds something special to it. The first glance of the Taj is just breathtaking and you're so excited that you have to stop here to take a picture...not quite realising that the view will get even better once through the arch.  Shah Jahan - you did well.  How is a modern man supposed to compete...

Anyway, entering through the arch you see the reflection pool at the base and then rising above is the beautiful and perfectly symmetric white marble building.  Its just staggering!  Its much larger than we thought it was and luckily the crowds quickly fade away as you are awe struck (for the second time!) starring at it in disbelief. Am I really here?   I know it sounds crazy and very cliche but its probably one of the best highlights we've had in the last few years.  Its just epic!

Since we were visiting just after the festival it was more busy than normal.  In fact, it was packed!  People were everywhere and the line to get into the mausoleum was long, winding around the building, up the stairs, and around again.  While waiting in line a local family behind us kept trying to sneak around us; well, actually they weren't too sneaky about it - they actually just blatantly kept walking around us!  We struck up a conversation with one of the younger family members, a late teenager probably.  He spoke good English and had fun talking to us.  We thought that making friends with him would have put an end to his family's line jumping, but it kept up.  So, we resorted to sticking out our elbows and shaking our head at them (and walking back around a few of them!).  It was entertaining if in the least!  We ended up having to wait in this line so long that by the time we got in it was dark.  As a result, we didn't see much at all because there aren't any lights inside.  This is one of the few old historic sites across the world that we've run in to that wasn't retrofitted with electricity, but we're not complaining since its original beauty was preserved.

One interesting thing is that the Taj changes colors throughout the day.  The white marble absorbs the light and shines differently depending on the time of day.  As the sun was going down it had a slight orange glow about it but as dawn hits its supposed to turn a gleaming white.  What a building!

And the Taj is only the main building...there is an entire complex of buildings and water features around it - every building being quite exquisite in and of itself!

When you enter the area to enter the mausoleum, you have to either take your shoes off at the entrance or wear these disposable little red shoe covers.  They are awesome!  Being tourists and having heard the stories of "lost" shoes at the site and knowing we stick out of the crowd anyway, we opted for the red slippers.  You can easily see them in them in the picture of me trying a new angle for my photo.   You know...trying to get the last of the remaining light and the Taj at an interesting angle... 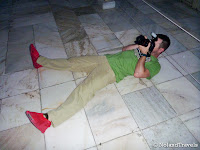 As darkness set in, we started to exit the complex.  We quickly understood why it closed at sunset.  Not only was their no electricity inside the Taj itself, but there was no electricity in the entire complex except for one single light at the central building where we first entered.  As we were walking out, we were instructed to keep any eye on our things.  "Please keep a close eye on your bags and don't encourage the guys selling souvenirs; its just a hassle", said our guide.  It was the last chance of the day and they would be aggressive.  Ah, no worries, we are seasoned annoyance handlers!  Well, the advice soon was forgotten as it was too easy and entertaining to chat with them.  At one point, these guys were selling stone carved turtles with a baby turtle inside which we had seen numerous times since we arrived in Agra. Well, I was joking with one of the guys that we'd only buy one if it had 2 babies inside.  Even though his turtle only had one baby inside, the young man followed us for a good 5 minutes - a half a mile or so to the bus.  He even kept hassling us through the bus window until we pulled away.  They're persistent - that's for sure! And actually, I was a little amazed that he didn't run away to try to find a turtle with 2 babies inside! 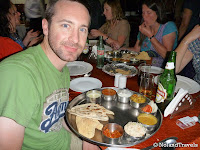 To cap off the epic day, we had dinner at a local restaurant where we had some good food.  You can see the thali I enjoyed (spicy pickle, rice, vegetable curry, salad, yogurt, bean stew, and rice pudding).  This restaurant also had some live music that was less than entertaining...apparently the guy had never made it past elementary songs with his violin.  His repertoire consisted of just a few songs, one being Frarajaca - we all got a good laugh out of that!  And instead of taking the simple 10 minute walk down the road to get back to our hotel, we opted for the Indian-style way home - 6 of us crammed in to one single autorickshaw for a great little zip down the road!  The evening made for a good end to a good day!
Posted by Unknown at 3:49 PM