Varanasi and the sacred Ganges 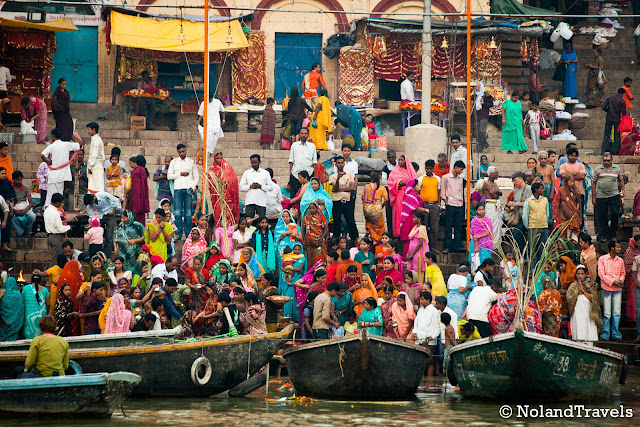 Varanasi is one of the most holy cities in the world for the Hindu people. It sits on the banks of the sacred Ganges (Gunga in Hindi) and is the only place where it flows opposite to its normal flow based on the land geography. People from all over India and other parts of the world come here on pilgrimage to bathe in the water of the holy Ganges. Hinduism is a complex religion with several variations but some core beliefs are Dharma (ethics/duties), Samsāra (The continuing cycle of birth, life, death and rebirth), Karma (action and subsequent reaction) and Moksha (liberation from samsara). Bathing in the Ganges is thought to cleanse you of your sins and facilitates liberation from the cycle of life and death.  Being such a historic, religious city - full of pilgrims nearly 24 hours a day with ceremonies occurring daily - Varanasi is a must see! 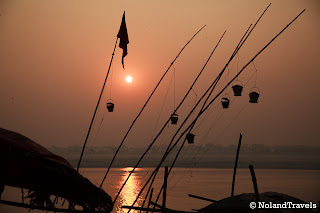 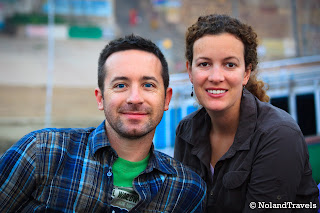 Disembarking from the row boat we saw another crematorium and just like Nepal, ending your life here is what every Hindu strives to do.

Now we headed into the small streets and narrow alleys to explore this ancient part of Varanasi...finding the city waking up with people going about their normal lives. Not surprisingly, we found cows and monkeys living in these alleys as well.  The monkeys just carry on like the city is one big playground and the cows are always rummaging through the garbage which is just in piles in random places.  While walking you always have to be on the look out for the "land mines" as our guide called them...but in Kentucky we'd refer to them as cow patties among other things...

The sites and smells were unbelievable as was the way in which they carried out life - eating, sleeping, working, etc.  We even ran into some school children on their way to school.  No big yellow buses here!  It was a big rickshaw!  The walk was just fascinating when compared to the Western lives we lead.

After our city walk and a nice breakfast, we went to a silk cooperative - a group of families that produce silk and silk products.  It was neat to walk through the maze of close-knit houses and observe them in all stages of the process.  Several guys were in the yard stretching out probably 20 yards of raw silk fibers that had just been dyed, in order to straighten them out and prepare them for the silk weaving process.  We also saw men and women both working on old-fashioned punch card weavers, making exotic and intricate patterns in glowing silk (while Josh and Ben played with the kids of the house in the adjoining room!).

We, of course, got the customary free drinks and display of all of their finished products in their salesroom.  After spending about 20 minutes oohing and aweing over bolts of silk fabric while the rest of group was (probably impatiently) waiting downstairs to return to the hotel, we walked away with only one, rather cheesy, silk cushion cover.  It came down to the fact that I had no idea what I would do with the fabric, regardless of how beautiful it was.  Well, at least I know where to go in the future!

Back to the hotel by midday, we actually took the afternoon off and relaxed in our room ordering room service - a delicious Butter Chicken and Panner Tikka Masala.  (Come to find out after the food arrived, it was actually the Paneer Butter Masala that I loved so much!)  We also spent the time sending off our laundry to be cleaned and organizing our trip to Ranthambore National Park at the end of trip, which included sending the guys off on their own to the train station to buy train tickets!  I'll let Josh tell you about that adventure:


Before arriving in India, a Tuk Tuk ride, err auto rickshaw to the locals, was high on the list.  Until now, I had yet to have an opportunity to ride in one but I was finally going to get the chance.  Exiting the hotel it was like the drivers just knew we needed a ride.  They pounced on us as we opened the door which was unlike other times leaving the hotel.  After acknowledging that I did in fact need a ride and telling them where to go, they both instantly blurted out the same price.  Haggling a little bit I was able to get them both down to the price I wanted.  Starring at them I wasn't sure which one to choose thinking - he seems better dressed or he seems more honest or he speaks better English.  Then in one genius piece of marketing one of them said, "I'm the fastest!"  Instantly I said, "You win, lets go!"  We were off whizzing through the streets honking, swerving, dodging everything in our way.  The chaotic drive was great fun! 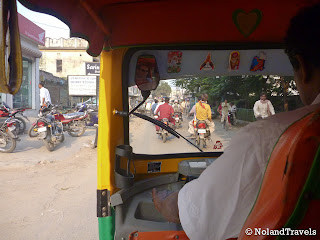 One good thing about the drivers is that they will wait for you and take you back if needed which was something I agreed on up front.  There wasn't any reason to go through the process of haggling with drivers again if you could avoid it.  Anyway, he parked and gave us directions to the "foreigner ticket office" which was a separate room off to one side of the station, air conditioned and out of the chaos of the main crowded station.  An hour later we emerged with train tickets in hand.  Finding our driver we took off back to the hotel. He was good fun and I instantly bonded with him by asking questions and egging on his driving, much to his amusement.  We will see him again later in the trip.

Our evening activity was to go back down to the Ganges for the nightly ritual that takes place to honor the sacred river. Again from a rowboat, we watched the show as people on the banks gathered as well. It is hard to describe so hopefully this video will give you some insight in to the events.  It all starts with everyone lighting a candle in a cup with some marigold blooms and letting that float away on the river.  Its a way to give thanks to the river.

To sum up the day, it was a day of amazement, watching the activities of the Hindu followers along the Ganges.  Life revolves around the river here and its fascinating to watch all the goings on along the banks. A couple times I kept thinking, I feel like I'm a part of a travel documentary.

After the great evening rowboat, it was back to the hotel for another awesome dose of Butter Chicken and Paneer Butter Masala!!  (my mom and dad used to always tell me that eating Chef Boyardee ravolis as a kid would turn my stomach orange...well, this very well may do the same thing - but who cares because it tastes so good! haha!)
Posted by Unknown at 5:03 PM