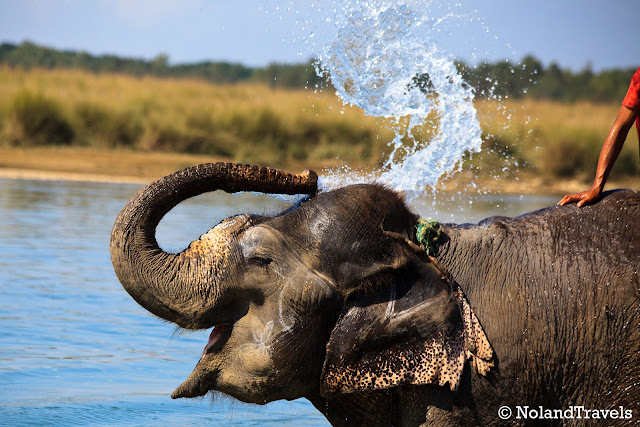 The next morning was our long awaited elephant safari through the jungle in search of the rhinos and other animals. Amazingly, the elephants came to pick us up at our lodge which isn't surprising after the fact because most of the lodges in the area have their own staircase used to mount the elephants. Ben, Nora, Josh and myself all got on the same elephant, Maya, a 12-year old – rather young in comparison to the others. We were the last group to mount but thanks to Maya’s youthfulness, she whizzed past several others on the way to the park to Josh's competitive amusement.

We sauntered through the town towering over all the other road traffic taking up more than our share of space before finally reaching the park's entrance to the jungle.  Starting on the paths we kept an eye out for animals but before long we started making our own path courtesy of Maya.  She would just walk through light brush while snapping off small trees with her trunk to make room for herself.  All the while grabbing a snack here and there.  Walking through the trees, dodging low hanging limbs and leaves on an elephant was a fantastic way to see the scenery.  Compared to a jeep, the elephant safari allowed us to feel a more natural part of the habitat, although the loud bunch in front of us did their best to let the animals know we were coming.

Our safari continued through the shaded forest and then out in to a clearing to cross a river! Slow and steady, Maya stepped down the bank and waded across the river.  Even despite the strong current she just took it in stride!  Well done Maya.

At the beginning of the safari, the lack of wildlife was overshadowed by the sheer fact we were riding an elephant but unfortunately, the rest of the safari was about the same – sauntering through the forest with not many wildlife sightings, only deer…and no rhinos!

Below is a fun series of me tipping our Elephant who passed the money up to the driver. That sure is one cool party trick! 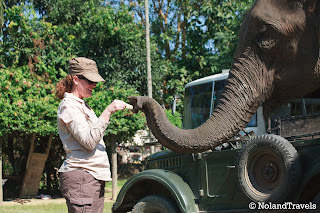 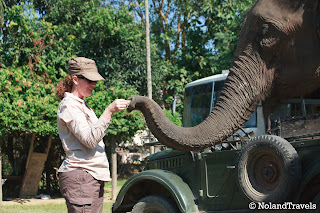 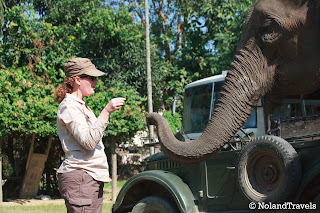 So what do elephants do after a walk through the jungle?  They get a bath!  After disembarking the elephants, we headed down to the elephant bathing location to see what the fuss was about.  Here they get a nice scrub down after their morning’s work and getting a bit more freedom to show off for the crowd.  The handlers skillfully climb on and off and played tricks with their elephants in the water.  There was lots of trunk squirting, elephant surfing, and deeper water trunk posing for the cameras.  Eventually they did get their official cleaning by the handler who scrubbed them down with a stone (yes, a stone, but imagine how tough their skin is!). They seemed to truly enjoy it – one laying there like it was getting a fancy massage!  Now if we could just find cucumber slices to cover the elephants eyes it would be a true makeover moment!

In one hard-not-to-laugh-at-moment, this poor sap found himself stuck in knee deep mud trying to take a shortcut.  A little later we snapped a great shot of him trying to clean his laundry like the locals.  I think his jeans are going to take a little longer to dry than the ladies' saris.  Classic!  Having taken a load of pictures, we went back to grab a simple, ahem – 2 hour, lunch before our afternoon canoe trip and visit to the Elephant breeding center later that afternoon.

Hopping into open top jeeps we had a few minute ride to the canoe launch site.  The canoes were old style, carved straight out of a giant tree.  It was an laid back cruise down the river.  Along the way we saw the same gharial crocodile as on the elephant safari and some birds along the banks.  The most stunning was probably the kingfisher – the namesake of the 5 star airline we took to India.  However, we were expecting more!

Now, I will be brief about the elephant breeding center because we all were quite emotional about it. It was actually more of a training center. Here in Nepal they use elephants in all forms of industry, including tourism.  This center breeds elephants, training them to have handlers, instead of taking elephants from the wild to fulfill the industrial needs. That is the beneficial part. But, the emotional part was that they endure harsh training and are chained by one leg and sometimes 2 legs for the majority of the day. They can roam the forest between 10am and 4pm, but that doesn’t seem nearly enough. We all left this center with heavy hearts and mixed emotions. 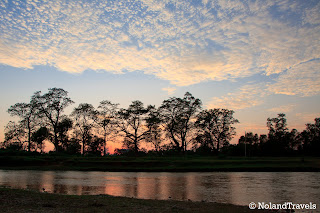 As the sun was getting low in the sky we had one final challenge: to get to the jeeps on the other side of the river, we had to find our way across a sand bag bridge.  Luckily, we managed no problem, hopping in the jeeps for the few minute ride back to the camp.

On our way to dinner we randomly found a cute little bat hiding in a archway which we promptly flashed awake with a few photos.  I'm sure to him it was like our alarm clock in the morning - annoying!

We had a fairly good chicken tikka masala dinner and some horrible cocktails. We should have known – alcohol is mainly there for the tourists and when they also have Mexican food and “American chop suey” (whatever that is!) on the menu then you should realize they are just trying to please the western visitors and they truly have no idea how to make cocktails (or any non-Nepalese food)! Fair play, lesson learned!