Across the border to India 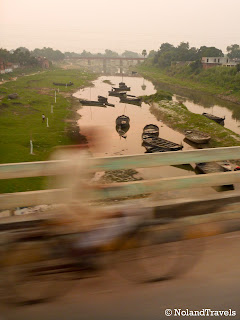 Another travel day but this time we would cross in to India! We were able to put away the Nepal guidebook and crack open the India one. However first we had to cross the border which is a task that can always be tedious. 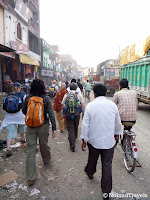 The bus dropped us off in no mans land between the two countries and our luggage was off loaded on to 2 big wooden pushcarts. We headed straight to the Nepalese customs and passport office that we could have easily just walked right past. Our one final task was to change our Nepalese Rupees into Indian Rupees. In what felt like a hole in the wall we swamped currencies and then walked across the border into India!

Instantly things changed. More hectic if you can believe it!  The road leading to the border was manic. Huge heavy trucks, the ones all decorated, were lined up all jostling for position, honking furiously as bikes and cars all weaved through trying to just get on with normal life. The shops and stalls were all open with people buzzing around. As we walked we made our way through the madness to a nearby hotel to freshen up before continuing our bus journey.

Our next destination was Varanasi but an all day drive away! The Indian roads are bumpy at best and besides hanging on, we spent the hours starring out the window watching the traffic and sites in various villages and towns. Each village brought a new dose of stalls, vendors, traffic and commotion. Also lots of waves, smiles and nods to the people out the windows. It was entertaining but we were ready to give our backs a break and get off the bus.

Here is some video I shot in traffic throughout the day.  Turn your volume down because there are a lot of loud horns in the video which is the norm in India. 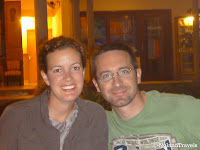 Our hotel in Varanasi served fantastic food and we were welcomed to India with a fantastic Paneer Butter Masala – cheese pieces covered in a thick Indian spiced sauce with rice; and a chicken tikka masala – tender chicken pieces cooked in a tandoori oven covered in a think masala sauce with rice. Add some Naan bread and some Indian sweets for dessert and you have the makings of a fantastic meal. It may sound scary but it is absolutely delicious!!  The photo is of us after dinner happy and full.
Posted by Unknown at 6:00 PM