Bright and early we checked out of the hotel because we were scheduled on an early morning bus that would take us to Chitwan National Park.  The bus station was about a 5 – 10 minute walk away and to save our backs the group leader organized a taxi cart our luggage to the bus.   This required a volunteer to go with the luggage to keep it safe. A free taxi ride? That’s got my name written all over it so I volunteered.  I can guard a few bags, no problem. 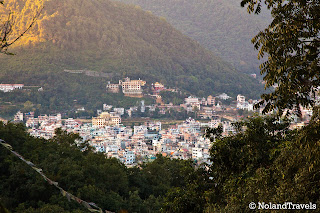 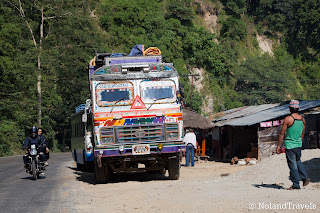 The taxi was a small beat up hatch back and loaded down with 14 rucksacks and 2 passengers the suspensions was maxed out.  On the console between the front seats the driver had an old box stereo speaker that I guess used to be his sound system but wasn't working anymore.  It didn’t give him much room to shift gears but somehow he managed.  I climbed in shotgun and we raced off to the bus station.

At one of the t-junctions the driver must have forgotten how much extra weight we were carrying because he flew straight into it saying, “ohhh”, when we realized his breaks weren’t going to get him slowed down like usual.  I rattled off a weary joke that made us both laugh laugh – luckily there wasn’t much traffic because it’s a free for-all at those junctions. Traffic lights – who needs ‘em?! Just go for it but be ready to stop!

Nearing the bus depot, I wasn’t 100% sure what bus we needed and neither was the taxi driver.  It was a divided 4-lane road with bus after bus lined up nose to tail in the left lane.  He stopped in a few places to get out and ask where we needed to drop the bags. By stopped, I mean wedged his taxi in between buses with just enough room on the right for traffic to pass - of course horns blaring as they passed.  Once he figured out the correct bus, the only way to unload the luggage near the bus was to block the right lane of traffic. So there we were, hurrying to off-load the bags in the middle of the road, again, traffic backing up behind, horns sounding and engines revving. We ended up throwing the all the bags between two buses in the street just so he could clear the traffic jam.  That left me stuck with a mountain of bags, between two buses on a manic road guarding them for dear life.  The bus attendants came up babbling something in Nepalese, pointing at some scribble on a piece of paper, trying to take the bags to the back of another bus.  I did my best to convey NO to them until the group arrived to confirm it was the right bus.  Whew!  That sure got the adrenaline pumping at 6am.

Bags loaded on the correct bus, we found a seat and got comfy for our 6 hour journey.

Kathmandu sits in a valley surrounded by the Himalayas that tower over the city.  Needless to say there are a lot of mountain roads – curvy with steep drops, narrow bridges - the works! Our bus set off to climb to the rim of the Kathmandu Valley then descend steeply to the flat region of the Chitwan jungle. Normally this wouldn’t be so bad but with the quality of roads and the driving style of the locals, the ride was interesting, to say the least! We were passing slower cars on blind corners, screeching to stops at bridges to let a bigger truck through or overtaking other buses with people on top at speed up on inclines. Also I don’t know how the suspension copes with the roads because they are so bumpy and rugged.  Its a wonder we didn't have a flat tire.

Since we were on a local bus, it stopped occasionally in local villages (or almost stopped…people jumped on and off while it was still moving most of the time). At one stage, we picked up a young guy that liked to hang out the door. He was entertaining for a while until he got off. Check out this video of him! Steph wouldn’t let me try though which I don’t understand why!

Once our nerves settled down it was "smooth sailing".