The Birth Place of Buddha 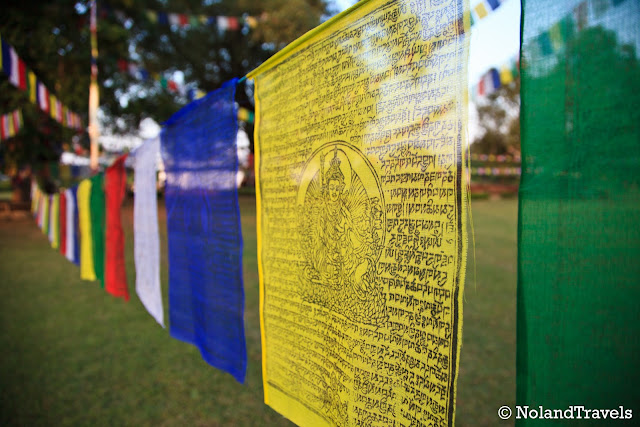 We woke the next morning to the unexpected sounds of elephants trumpeting nearby. Our simpler life wish had come true, no electricity. All of Nepal’s electricity comes from India who rations it, causing Nepal daily brown outs. This one happened early in the morning and with the fan off we could also hear something scurrying in the ceiling. We were quickly wide-awake hearing the scurrying noises that led to some squawking and wild scratching before the sounds abruptly stopped. Eek!

After breakfast, we piled in our own private bus and headed off for Lumbini – the birthplace of Buddha, near the India-Nepal border. 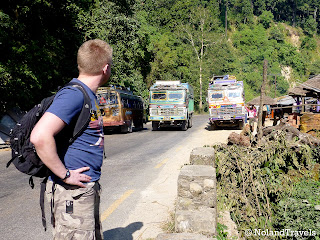 Too many hours later as we neared Lumbini where we ran into some traffic from road construction. As we crept along at a snails pace, I stuck my head out of the window to see what was going on. A loud horn sounded and I was spooked back into the bus, but in doing so my glasses hit the edge of the window falling off my head. In a slow motion scene right out of a move, I tried to grab them, but could only watch as they dropped to the dusty gravel road. “My glasses”, I yelled!  Sitting near the back of the bus I dashed up the aisle I hearing Steph shouting, “Stop, stop, stop!” Throwing open the door I jumped out of the bus, running and dodging through the traffic of cars, trucks, carts and animals to try and find my glasses.

I found the edge of the bridge where they should have been from memory but without glasses I was having a hard time seeing them in the chaos of traffic and dust from the road. The details were a blur, literally. Luckily one of the locals on a bicycle shouted and pointed down at the road. Bingo! There they were, scratched and bent by the fall, but still in one piece, amazingly! I thanked the man and shook his hand before turning to find the bus. Running back, I found our guide who knew where the bus stopped and eventually ran into Steph who was also off the bus at this point. Boy did I have some explaining to do! Ok, Ok, I know now not to stick my head out of the bus window with glasses on but we were moving slowly so I knew I could find them ☺

Steph later told me she had a few anxious moments saying, “I stuck my head out the window watching you dodge traffic peering under bikes, carts, trucks and animals. Then the bus started moving as traffic suddenly decided to clear and I lost sight of you as the bus found a spot to pull over.”

My adrenaline was racing as I settled back in my seat.  You'll be glad to know I kept my head inside the bus for the remainder of the journey that took us to the jungle camp. 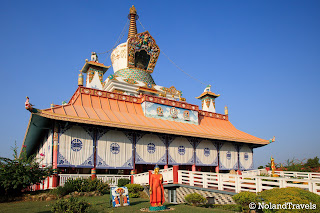 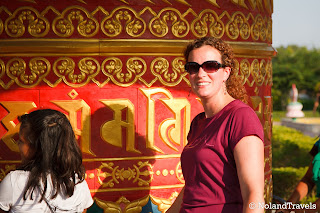 Another glacially slow lunch (albeit quite yummy chow mein!) awaited before we headed off for a bicycle ride to see the Master Plan – a giant project to build up the area around Buddha’s birthplace. Setting off from the camp, we had a mile or so to ride on the roughly paved and chaotic road. You know the ones…cars, buses, motorcycles, trucks all honking mixed in with buffalos, goats and dogs. Needless to say we were nervous at first but found our way without any issues despite our rear brakes being practically shot.  Riding required a little extra forethought in panning your movements in a crowed area but we managed.  Keep Steph in front, dodge traffic, yeah we're good, no worries!

We didn't get the real name for the development but in Lumbini its referred as Masterplan; an idea conceived in the 1970’s. It is a huge development project that has been going for years and will continue for years because its being developed at the same pace with which they cook food. Many nations are building temples to commemorate the place where Buddha was born along with some Nepalese cultural sites and buildings.

We started at the German temple, finished in 2003. It was huge, colorful and it’s gold leafing glistened in the sun. Walking around it, the gardens depict Buddha’s life in various scenes of statues, from birth to enlightenment. As temples go, it was no shoes allowed so we strolled on the amazingly smooth sandstone walkways. There were also some enormous prayer wheels to spin which you can see Steph with in the photo. The decoration inside and on the outside walls under the awnings were very detailed and so brightly colored.  Especially for something built in the last 10 years. 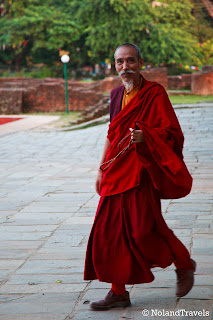 Riding on a bicycle through the development was a neat way to see the grounds and a good thing because it covers a big area. The place where Buddha was born is marked by ruins and a monstrosity of a building constructed some years ago.  They have a stone that marks the exact spot and people from around the globe travel to see it. There are lots of prayer flags strung up everywhere and Buddhist monks going about their business on the site. We had fun with one of the monks who was doing lap after lap as we just admired and took photos of him.  He was so gracious smiling and seemingly enjoying the attention.

One last surprise awaited this evening back at the camp. It was a fairly simple camp with dimly lit paths and candles in the room (in case of a brown out). On the way to dinner we learned that Ben and Nora had just gotten engaged! What a surprise! Ben found the right moment in the candle light and she said "yes"!
Posted by Unknown at 5:13 PM