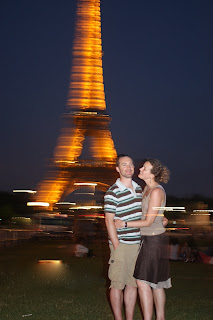 With the day in Strasbourg at a close we piled back in the car for the final few hour drive into Paris...well, the outskirts of Paris, to drop the car at the airport.

After saying farewell to our Audi A4, we were back on public transit for the first time since Munich and stuck on a delayed train. Actually a malfunctioning train with no a/c which gave us a chance to discuss public transit versus personal transport. Would we rather be sitting in traffic on the autobahn or stuck in a broken down train somewhere between stations...tough question.

This time in Paris we tried something a little different; we rented an apartment instead of checking into a hotel room. We stayed in a one bedroom apartment full of old charm on the fifth floor that had huge windows opening out over the street. It was a fun place to stay for a few nights. It didn't come with normal hotel services such as room service or house keeping but it gave us extra living space and the unbeatable experience of living in the city like a true Parisian. The apartment was a great change from hotels so keep this in mind when you are traveling. It's worth the extra hassle if you don't mind sacrificing some hotel nice to haves.

Now with our arrival in the city being well after dinner, we headed to one of the places that goes well into the night and a place where you can always get food - the Avenue des Champs-Élysées! We were on the hunt for a midnight pizza and by the time we finally cut into our pizza's it was well after 1 am. Expensive? Yes. But the atmosphere on the Champs-Élysées with its tree lined streets, high end fashion stores and people who want to be seen was totally worth it. We even did our best to dodge traffic for a few photos of the Arc de Triomphe in the middle of the 12 lane boulevard. Too fun!

The next couple days we did the normal amazing sights in Paris. Its only normal by Paris standards...local bakeries to get pan au chocolats for breakfast, the Musée d'Orsay, the Sacré-Cœur Basilica, strolling through the streets and along the River Seine shopping for art...and the list goes on. We just enjoyed what the city had to offer.

The only real problem was the heat. It was well in the the 90s which in a city not geared for heat, serving water in 2-gulp glasses, was at times overwhelming. However we did take opportunities to get out of the sun or cool off. For instance, instead of eating our crepe filled with Nutella in the sun we sat in the shade and enjoyed views of Notre Dame. Or at the Louvre, where the fountains were calling our name, dipped our feet in the water and cooled off along with all the other hot visitors.

A big highlight for me was having a birthday in Paris. To celebrate we used a recommendation from a friend at work, who is from France and lived in Paris. It was a quintessential Paris cafe with locals spilling out. There was even a short wait for a table! Luckily for us, our waiter had spent a few years in the UK and spoke very good English. He helped us pick a great bottle of wine to accommodate our nice steak dinners even arranging to have a huge firework in my dessert. I'm not exaggerating, this wasn't your average candle - it was a mini roman candle! Excellent! For dessert Steph and Tara enjoyed Nutella tiramisu and it was served in an old fashioned canning jar - they said it was incredible but I can't say for sure because I didn't get a bite...

I need to give a big thanks to my awesome Mom and Dad for the great birthday dinner! We were thinking of you.

Before I get to the last night of our trip I want to quickly mention the hilarity that ensued on the top of the Arc De Triomphe during our visit at rush hour. I'm sure its a daily occurrence but seeing the sheer number of vehicles trying to all at once squeeze through the huge roundabout at rush hour was such a laugh. Cars as far as you can see trying to get into the roundabout and the chaos in the roundabout for cars trying get out, all horns blaring. You'll have to see the photos to fully understand the size of the traffic jam. In this case, the public transit wins hands down.

Upon reaching our last night in Paris we realized our non stop trip was starting to catch up with us. We needed to slow down so what better way to do so than to have a picnic at the Eiffel tower. After rounding up some cheese, wine and pastries we did exactly that, stopped and enjoyed one of the best views in the world. Under the clear skies and warmth of the summer evening we watched the Eiffel tower go from day to night and sparkle in all its splendid glory.

A perfect ending to a European road trip enhanced by the great company!