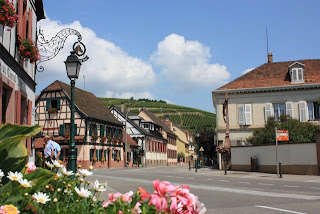 Colmar was a lovely little cottage style town with its cobbled stone streets. The slower pace of life there was great. We were finally able to enjoy a warm summer evening with a late dinner topped off with some regional treats that included our first taste of Alsacian wine and the tarte flambet – most resembling a pizza but no tomato sauce…just white sauce, cheese and a bit of bacon/ham on a pastry-like base. That is the traditional style – Tara and I had ours with Munster cheese and potatoes – yum! Full from dinner we enjoyed a lovely walk through the streets and then hit the sack.

On leaving Colmar the next morning, we began to see the Vosges mountains which run south to north in the Alsace region. Along the base of these mountains are the vast vineyards and towns that form the Route du Vin (the wine road). The wine road produces some award winning wine and was the perfect path to Strasbourg, our next destination.

We picked up a wine road map from the Colmar tourism office who helped out tremendously giving us a head start by quickly circling a half dozen of the best towns along the route. Along the route we quickly found that there was a town, then you went up and down a small hill and you were already to the next town!

We stopped at a couple of the recommended towns and had some food and wine. The “road” literally has a vineyard or wine cellar (a wine merchant’s store, not necessarily his vineyard) every few feet. The picture at the top of the article is one of the many picturesque towns we found.

The Alsacian wine is generally white and sweet. We tried a little of everything and the Reisling was probably our favorite. In walking in one wine cellar we found the merchant entertaining a young couple, speaking in French. He attended to us as well but we quickly found he spoke very little English. Fortunately the young couple spoke great English and they became our official translators. They were down for the day to buy wine; they lived about an hour away.

The merchant’s wine was the best we had so far so we tried several. We also asked if he gave tours of his production facility. After a few sentences through our new translator, a quick tour was agreed only if the couple would translate, which they luckily did.

This particular merchant was a cooperative wine maker meaning he sourced all his grapes from several surrounding vineyards (he didn’t grow his own). Of the 2 million bottles a year he produces, most of them are exported, many going to Asia where they pair well with the Asian cuisines. On the tour, we were able to see the massive stainless steel tanks used to produce the excellent drinks we just enjoyed along with the almost fully automated bottling process. It only takes 2 or 3 staff to bottle all that wine.

After our tour, it was recommended we try the winemaker's sparkling wine that had recently won “effervescent of the year”. It was great! It's called Cremant. Not sweet, not too dry and perfectly bubbly. During our tasting the merchant, with the help of a little translation, was adamant it was better than champagne but just not from the Champagne region. We’ll let you know if we can find it being sold in the US as we would recommend you all try it. And best of all, it was only 6 euros!

A big thanks to our gracious friends who happily translated for us.

With a memorable wine road experience in our pocket, we decided to call it a day on the route du vin and headed on to Strasbourg, knowing we needed to find a hotel!

With the help of Satnav we found a hotel. The lady at the desk offered us keys to let us go look at the room and we scored a family room (for 4 adults) with two double beds and loads of antique furniture that I wished I could pop in my bag like Mary Poppins! Loved it! And, we had a view of the cathedral that dominates the small town’s skyline.

Dinner was lovely – more tarte flambet for Tara and I – and Josh got adventurous in ordering the “pork cheeks” which turned out to be quite yummy! After our dinner we retired to our family room, enjoyed a bottle of our wine from the day’s route and played Zac and Tara’s favorite card game “345”. Good day!

Photos
Posted by Unknown at 6:45 AM