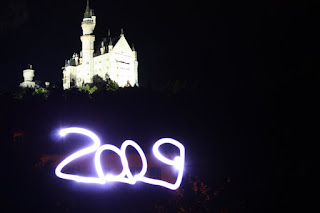 We arrived just outside Fussen in Hohenschwangau to try and find our hotel just as darkness was setting in. Since we were arriving after normal check-in hours we had to call the phone number on the confirmation. The 24 hour desk was up the road at another hotel where we had to go pick up the keys.

As we were about to go in the main door of our little B&B, a lady came out asking if we were the Koch family. Nope. Apparently we had been given another family’s room keys. We told her our name and handed her our confirmation and she was quick to point out – the reservation was for JULY - not June. Oops. Upon discovering this mistake and having four people standing out in the rainy night, the lady made a big scene yelling, "Ei-yi-yigh!" as she stormed off into the B&B, turning on lights and booting up the reservation system. After she settled down she turned out to be really nice and gave Zac and Tara a room with a view of the castle. An exceptional room with no reservation, whew!

You must know that the Neuschwanstein castle was the inspiration for the Walt Disney World castle and is truly like something out of a fantasy. There is just something magical about it. After dinner we headed back out into the rain to take a few photos and enjoy the night view. It was pitch black and the castle was amazing perched up on the side of the hill. Going back to our childhood days again ala the Etch-A-Sketch, we tried our hand at creating some light painting masterpieces. One of our better results is the photo above, done by the little known artist Znoland...

The next morning we woke up to more clouds and rain, which meant no paragliding over the castle. Doh! I guess it just wasn’t meant to be.

Instead we headed out for a tour of the castle. On top of the mountains where the views are spectacular, King Ludwig II (who was a bit odd, they say) created a fantasy world of a castle, inside and out. The castle was supposedly in honor of composer Wagner and was decorated to include scenes from his operas including a fake cave. One of the highlights is the view from a bridge near the castle which ranks in our top 10 views list. It was quite surreal although I could be biased from all the Disney castle commercials over the years...

After braving the raining cloudy weather in Bavaria, we headed towards our next stop - Colmar, France. Along the way, we even ducked into Switzerland and realized at a rest stop we didn’t have any money because they weren’t on the Euro. That meant no toilet break until we were back in an EU country because all the toilets cost 50 euro cents to use!

Bavaria and castle Photos
Posted by Unknown at 6:14 AM