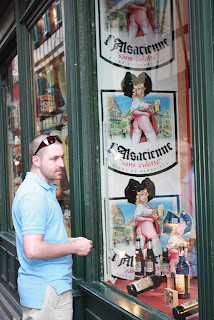 There’s no better way to start a day in France than with a croissant and coffee. This became our regular breakfast for the next few days while in France. Easy to find and relatively cheap! So after the breakfast of French champions, we headed for the much talked about astrological clock. We were told to line up early so we could ensure we’d see it all – the sight included a 20 minute video about the clock then you could see it in action as it struck 12:30pm.

The clock was intricate and ornate but unfortunately the video and 12:30 striking were quite a letdown after all the build up. But we’ve got some lovely pictures of the artistry on this beautiful clock but it wasn't much of a show.

We then took a leisurely boat cruise around the town, which included going through 2 locks, which was a new experience. Strasbourg is a larger small town, if that makes sense, and we could tell there was loads to see and do but we were there only briefly.

To top off the day in Strasbourg, we climbed the spiral staircase to the top of the cathedral tower for a commanding view of the city. What a sight! Old crooked buildings with erradic rooflines, the new modern buildings of the European Parliament and the other historical buildings such as the Palace.

Photos
Posted by Unknown at 4:00 AM