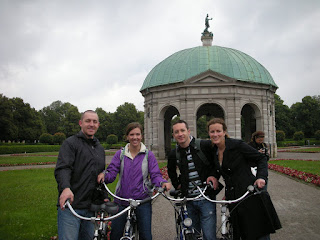 To entertain Zac and Tara who flew over in dire need of some vacation, we decided a road trip through Europe would be fun... starting in the beer and brat capital of the world - Munich, Germany. We wanted to get a feel for what we had heard was one of the most livable cities in the world known as Munchen in Germany, which is by far much more fun to say!

First things first – we had to try try litre of beer. In reading up on the many beer halls in the city most of the reviews said we should head straight for the Hofbrahouse even as touristy as it can be. The reviews are correct! It was a fantastic way to spend an evening listening to the German band jamming away, enjoying the huge litre beers and a smorgasbord of sausages and sauerkraut.

The next morning we geared up for our bike ride through the city. Since we only had a short time in Munchen it was the perfect way to get a feel for the city even through the cold and rainy weather. A few of the stops included the world’s biggest beer garden in the huge English garden in the city center, the place where the Nazi party got its start and the man-made surfing wave that our Hawaiian tour leader uses every day to keep up his skills. One interesting place was dodger’s lane - back in the day locals would walk this lane instead of the main road to avoid saluting the giant swastika installed in the area. Not saluting could see you sent to a work camp or worse... killed. So dodge we shall…

Another fascinating place was at the University where a group student protesters called the white rose resistance, threw anti-Nazi leaflets out of the 2nd story window onto the Gestapo waiting below to take them away. There is a monument to the students with what looks like leaflets scattered across the pavement. They were taken and guillotined...in the 1940's. Sad story, but worth a read.

Our favorite experience in Munich was by far the yodeling bar we stumbled upon later that night. Being a true local hangout, we were fish out of water that went something like this:

Walking up a narrow winding set of wooden stairs we could hear the distinct music echoing from above. Smiles already on our faces, we opened the door at the top into a tiny attic bar with 8 or so tables, a bar and a small area with a chair for the older gentleman who was yodeling and playing the accordion at a lightning pace. With only a few other groups of people in the bar we were quite obvious tourists as we sat down. We then found out the yodeler was quite the comedian where even in German it was quite obvious when people are having a joke or 5 at your expense. We just laughed pretending we understood the German jokes, soaking up the atmosphere. The jokes were on us and it was all the better we had no clue what they said.

As the night went on he warmed up to us indicating when we should sing and gesture in certain songs. We meet a local in the bar who was happy to do his best at joke translation and a few were even funny. At one point he asked, “How did you find this special place” and “What you mean by I am awesome?”

As the bar filled up we shared a table with some guys from Switzerland who were quite entertaining as well. I think they were just as enthralled by our accents, as we were with theirs.

Even just a short time in Munchen was enough to see it is a livable city and a city I can’t wait to get back to.

Yodle-ley-hee-hoooooo, it’s on to Fussen tomorrow.