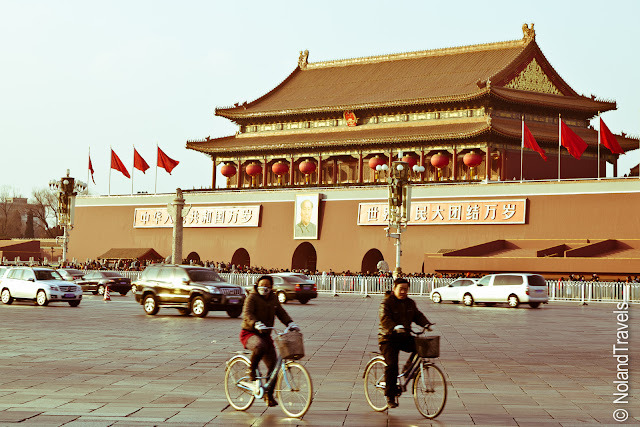 What can I say about the Forbidden City - the infamous home to 24 emperors over a couple hundred years?  Dating back as far as the 1400s, its a huge complex of palaces, gardens and the royalty extravagance you'd expect.  On top of the 980 buildings, you can see artwork, golden cups, carved jade stones that took hundreds of horses and men to move from one side of the country to the other, along with narrow passages leading to gardens while hearing stories of empresses and concubines.  It's hard to imagine a time where EVERY one inside the walls had to be specifically allowed in by the emperor!  Not to mention the eunuchs (normally also servants) who carried their man hood around in little jars on their waist so they could be trusted not to infiltrate the royal blood lines.

Forbidden to all, just take a look at the security measures.  A 26 foot high wall surrounded by a 170 foot wide moat!  No wonder this place has a name like The Forbidden City.  People just had no idea what was inside the big walled city.  Now a days luckily it opens to visitors and not used as anything official.

At each entrance there are usually 2 gilded lions, one male and one female, guarding the doors (See the picture at the bottom).  Under the male lion's right paw is a ball representing imperial power.  Under the female's right paw is a baby symbolizing fertility.  We couldn't get over the women's claws and the baby...these were exceptionally detailed.

All of the buildings' roofs are glazed yellow tile, the color of the emperor. They are decorated with a man riding a phoenix leading a string of demons followed by an imperial dragon.  You can tell a building's importance by the number of little demons following the phoenix.  The more the better!  The one on the left was one of the main buildings used by the emperor while the one on the right is a minor building.  Only The Hall of Supreme Harmony had 10 demons.  No other building in imperial times could have that many.

And the buildings all have surreal sounding names:  Gate of Supreme Harmony, Palace of Earthly Tranquility, Palace of Heavenly Purity, Hall of Mental Cultivation, Gate of Divine Might, Palace of Tranquil Longevity and on it goes. 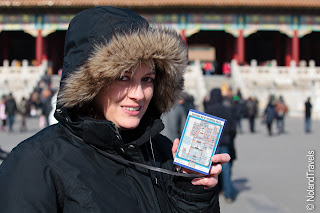 One other note.  We had read that the English audio guide was narrated by Roger Moore.  If it used to be, its not any more.  However, we did run into a tech upgrade in the tourist industry - GPS enabled audio guides!  You walk around and it just talks to you since it knows where you are.  It even had an electronic map with LED lights that lit up as you walked around.  Cool!  You can see Steph holding it in the photo.

Verdict - there wasn't as much to see as we expected, but it is full of ancient mystic, grand symbolism and historic significance. 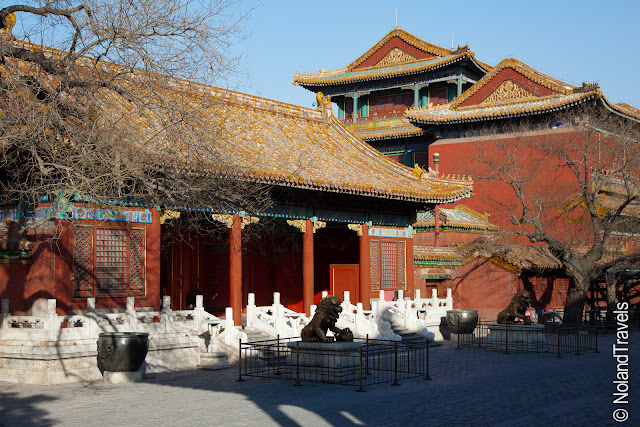