Off To See The Sharks 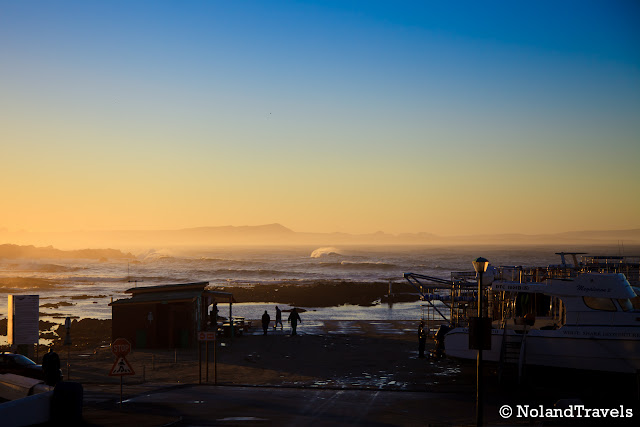 Awake around 4:30, we were dazed but excited for the upcoming week.  Climbing in the van for the 2 hour ride from Cape Town to Gansbaai (Haunz-by), we made friends with Rudy our driver, who drives for White Shark Projects, the company we'd be working with.  This is actually his normal routine, carting clients back and forth any day the boat goes to sea.  Before we set off though, we had to make a quick stop for him to get some breakfast at a gas station which suited us fine because we didn't have much either. 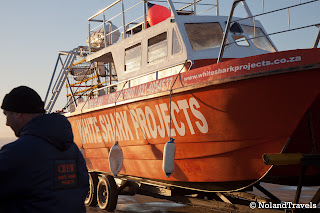 As you probably know security is a big concern in South Africa.  (the ADT armed response signs per square mile must be an amazing statistic!) This particular gas station had separate entry and exit doors, both guarded by security, aiming to try and control who goes in and out.  This was a good thing because even at this time of the morning there was a lot of riff raff hanging around outside.

Looking around the store in a sleepy fog, I was struggling to figure out what to grab for breakfast.  All of the sudden I hear loud noises followed by a huge commotion at the exit door.  Looking up, I see some guy reaching his arm in as the door is trying to shut.  With a jerk he ripped it off its track, breaking it open.  Squeezing through the door he started yelling and screaming, holding his arms and hands to the cameras like some kind of rain dance.  Soon enough there was a crowd of people around him, including the security guards, trying to calm him down.  He continued running around the store yelling which I gathered was an attempt to plead his innocence to something.  Then as the group gathered around him once again, he tried to evade them but instead crashed into a big metal rack of candy bars, knocking it over, spilling candy bars everywhere.

At this point, I'm standing there starting to get a little nervous (ok, a lot nervous) not knowing what to do, still holding a bottle of water and some muffins.  The entrance door was closed and a big chaotic crowd was gathered around the exit.  Funny enough, I do remember seeing a horde of arms reaching through the ajar door, grabbing as many candy bars as they could off the floor.  Anyway, the tension was increasing as more and more people continued to try and subdue this man with more of the crowd getting into the store.   I dropped my water and muffins and headed towards the exit to fight the crowd.  Luckily I saw Rudy, wedged in the door, waving me over where he gave the door a big push which helped me squeeze out.  Through the crowd, we made our way back to the the van.  My adrenaline was on high alert for sure.

The entire time Steph was watching from the van seeing the man running across the parking lot being chased by a pack of people.  She saw him crash into the door, break its track and squeeze in.  As a large crowd of angry and yelling people developed she didn't know what to do and was glad the windows were fairly tinted. 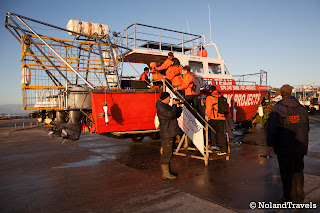 Driving out of the of the parking lot, Rudy explained that there was an night club just across the parking lot which was most likely where the crowd had come from.  What a wake up call, gees, the sun wasn't even up yet!  Later on we were able to laugh about it, but that was sure unexpected!  Fortunately, the remainder of the drive was completely uneventful! 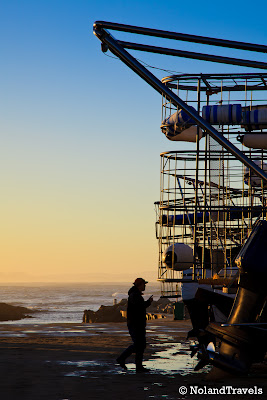 The sun was just about up as we pulled into the parking lot.  When we signed up for the project it wasn't 100% clear what we'd be doing, but we did know that we'd be on a sharking diving boat aimed at tourists see sharks from a cage.  What we didn't know was that for day-one of our volunteering activities, we'd be treated like clients to learn how the trip felt from the other side.  And with that short notice, we frantically dug our swimsuits out of our bags and Steph quickly popped her sea-sick tablet (which had a suggested 2 hour lead time!).

We were ushered into the breakfast room with the other clients and I topped up with bacon and eggs and a cup of coffee.  Steph, on the other hand, having had a bad experience the last time she was on a small boat on the sea opted not to have breakfast (other than the muffin she previously ate).

We signed the customary waiver form and the captain came in to give his safety briefing.  We then were fitted with life jackets, before making our way down to the dock where the boat was loaded and waiting to take us to sea.

Throughout the entire week the members of White Shark Projects made it extremely clear - the Jaws phenomenon isn't reality and actually is a partial reason why sharks worldwide are in decline.  However, walking down the hill to the dock, in the picture above, was an eerie feeling.   Luckily, it was just Hollywood playing with my fears because it was nothing like the movies.