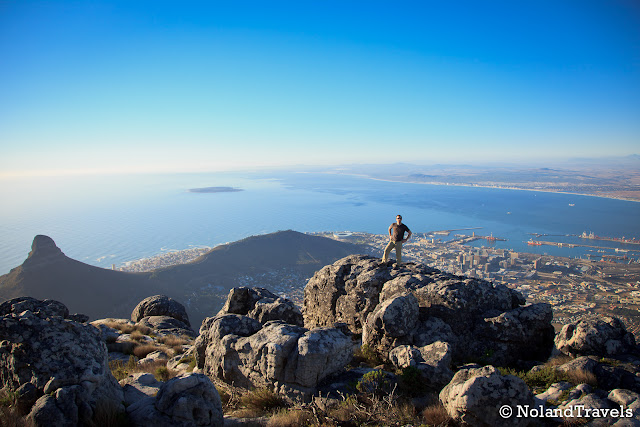 So before we get to all the shark diving goodness, we had a day in Cape Town to help us settle into South Africa. For some reason most flights from London to Cape Town are over night which gives you a few extra hours on the ground, that is, if you can sleep on a plane. Landing early in the morning, we didn't really have a plan but since it was a clear day full of glorious sunshine, we decided to go see the city from atop the infamous Table Mountain. 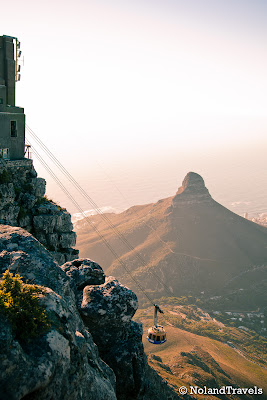 Getting to the top is surprisingly easy thanks to a cable car! The recently refurbished Swiss style cable car takes you up nearly 2400 feet to the top in a scorching 4 minutes. It also rotates so everybody gets a 360 degree view which adds an interesting dynamic of climbing up and rotating which is strange at first.

The top of Table Mountain has been declared a nature reserve and is a fun place to explore. Besides the impressive views of Cape Town and the surrounding areas below, there are all sorts of plant life and wildlife to find via the many paths winding around the rocky surface. We had a good time climbing on all the boulders looking for new views, finding a few fun ones.

Speaking of wildlife, meet this creature called a Dassie (pronounced "Dussy"). They are found all over Southern Africa. Besides looking surprisingly like a rat with no tail they are the elephant's closest living relative. Seriously!?

As the sunset approached, we decided to get a new vantage point opting to head down to a place called Signal Hill because numerous people recommended it for sunset. We arrived just in time to catch some good views overlooking the World Cup stadium. 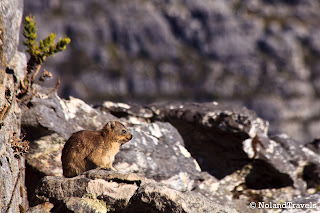 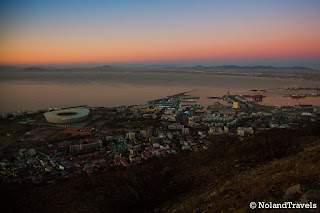 With darkness setting we headed back to the backpackers lodge to officially check in and get ready for dinner on the V&A water front. Our choice of restaurant was a highly recommended steak house (Balthazar) with supposedly one of the biggest wine-by-the-glass menus in the world. Well it didn't lie. Sitting down at the table we were handed what felt like a Sunday paper for a wine list. It came on huge wooden scroll!  It was overwhelming so we opted to use the services of the in-house sommelier who helped us find a couple of amazing glasses of wine to go with our huge steaks. Yum!


It was a fantastic evening on the waterfront but we had to cut it short. Tomorrow we are off to see sharks and our ride to Gansbaai ( pronounced: haunz - by ) was scheduled to pick us up at 5:00am. Sweet dreams... well sort of, full of sharks that is...