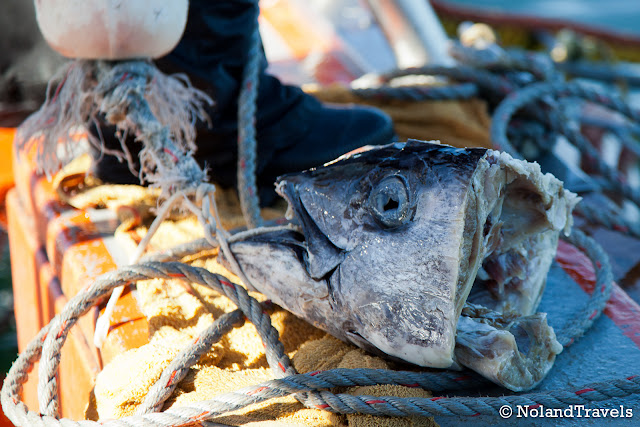 So, how do the shark diving boats lure the sharks close to the cage for prime viewing? First things first, you need to know where the sharks hang out. In our case just a 15 minute boat ride off shore from Kleinbaai in "Shark Alley".  This infamously name channel runs between Dyer Island (a huge bird colony) and Geyser (ghee-ser) Rock, where 50-60 thousand Cape Fur Seals reside.  That is the makings of shark heaven.

Next you need a chum line that the sharks can't resist. 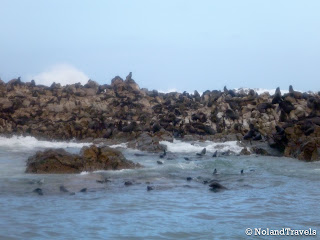 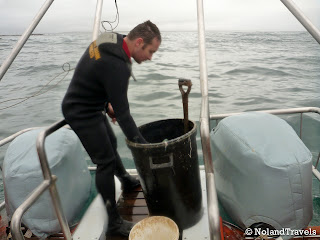 Ours started with a big trash can to which we added slightly frozen tuna tails, bigger portions of a local fish called snook, and the magic ingredient, a rust colored thick anchovy oil. Yum! Then using a small flat shovel, we chopped and mixed it all up, adding sea water to complete the smelly concoction.  When the mix is ready, the key is to make a trail so that the sharks can trace and investigate the source - being our cage.  The current takes it away and curiosity brings the sharks!

Then once the sharks are near the boat, a tuna head is tied on a rope and tossed out in front of the cage which acts as a visual target for the sharks. Keep in mind that there are a lot of rules and regulations around the cage diving trips. These help make sure the boats are having as little impact on the shark behavior as possible. Regulations such as what ingredients can and can't be in the chum line, ie no blood, and other regulations that outline how many tuna heads can be lost on a given trip. The latter is controlled because shark viewing can get a bit more interesting if the sharks get the bait (eg. thrashing, splashing, etc).  But this also impacts on long term shark behavior. The boats are not in the business of feeding sharks, just viewing.

Once out to the dive spot, the captain will yell to start the chum line. From the back of the boat, using a old motor oil container as a scoop, you reach into the foul mixture and start poring the mixture into the water. As the current takes it away from the boat, you add more and more to make a trail in the water. This cycle repeats as you maintain the chum bucket by adding more water, chopping with the shovel to get pieces of fish stirred up and occasionally adding the anchovy oil. You have to be careful to not spill the oil because you just can NOT get the smell out of your clothes.

Back at the garage, they buy and keep this in a huge plastic bin the size of a hot tub.  Whoa, that's a serious amount of oil!  It comes from the local anchovy plant just in case you were curious.

I know it sounds crazy but I didn't mind this job, well until the sharks started getting interested! Usually feeder fish and birds would gather, both taking the bigger chunks of fish out of the chum line which was entertaining. However, the best part was that the sharks literally swam inches away from your feet, fins breaking the top of the water as they cruised by. Being at the back of the boat there really wasn't much of a barrier between you and the water, unlike the sides on the rest of the boat. There was an engine on each side and a track between, open to the water where the diving cage was moved on and off. Without a wall you were always looking right at sea level and it was so much more evident how close you are to the water and the sharks!

Usually I would get the chum line started but once the sharks started interacting with the cage, I'd hand back the chumming duties to the normal boat hand who would continue the magic chum line. With me on chum duty, we were never without sharks!  I'm taking credit for that... 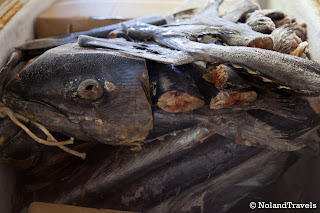 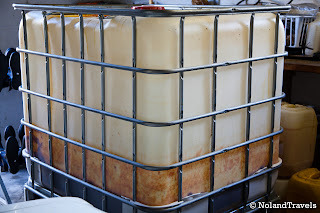 One day sticks out in my mind at sea.  It was an extremely rough day at sea and the boat was rocking big time because the swell was huge. Up, down, back and forth.  The wind was gusty and a light rain was coming down. The entire boat, outside of the crew, was eventually sick. Anyway, as usual, I happily volunteered to start the chum line.  Normally I could do so comfortably by just leaning up against one of the rails at the back of the boat allowing me to use both hands to get the process started. However, today I had to actually hang on for dear life.  So with one arm wrapped around a ladder rung, I started making the chum mixture. With the other arm I started chopping the tails, then adding sea water and oil. This went on for a few minutes and I eventually got the chum line going, but it was hard work and a slow process. Plus, I was of course quickly covered in the stinky mixture as it sloshed out of the trash can all over me every time the swell surged.  I was a stinky mess!

Before I knew it, the sharks appeared and as usual they circled near the chum line at the back.  They would investigate the cage then circle around the back. Ordinarily I would have just been amazed by their presence but with the boat thrashing around, I quickly forgot about the chum line and focused on not being bait in the chum line. At times I'd look down as the boat surged to a 45 degree angle, the back even slightly submerging under water, just as a shark cruised past! It only took a couple of those for me to be ready to give up chumming for the day. So I handed my duties over finding a more suitable role...taking photos!

The trip ended prematurely with the few that could stomach it having a turn in the cage. Back on shore, washing down the boat was an adventure thanks to all of the clients who had "contributed" to our chum line. Stinking of chum, it was finally my turn to get clean but the chum smell just wouldn't go away.  I ended up leaving my clothes outside. There's just no going back after that anchovy oil hits your clothes.
Here's another shark photo for good measure. 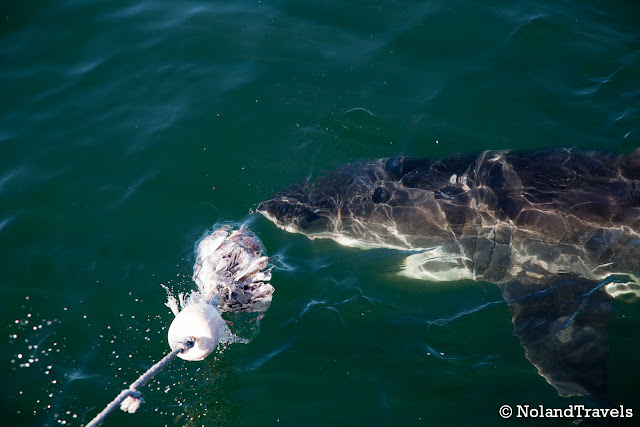