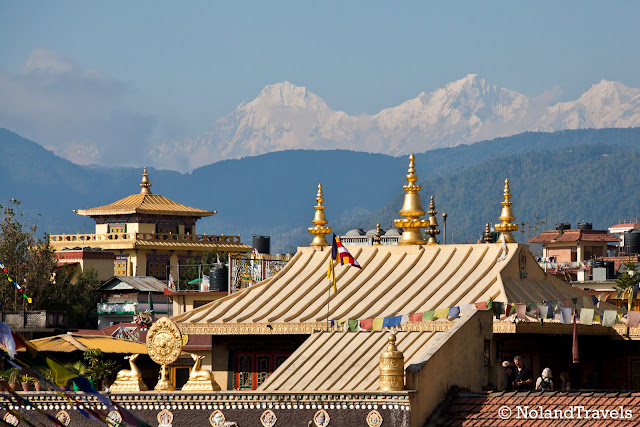 It’s no small hop to Nepal and India….and being our first real trip to Asia we have been eagerly awaiting this journey! From London it was 8 hours to Delhi and another 2 onto Kathmandu. To change planes in Delhi, we had to go through security again. They had a separate line for the ladies and Steph’s security lady asked if her hair was naturally curly. She replied yes and the girl said, “It is looking good on you!” (a compliment well-received after an 8 hour overnight flight!)

On the landing approach into Kathmandu we were given our first views of the mighty snow-capped Himalayas which quickly snapped us out of our air-travel daze. Let the adventure begin! 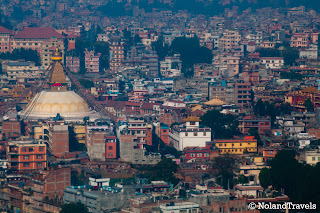 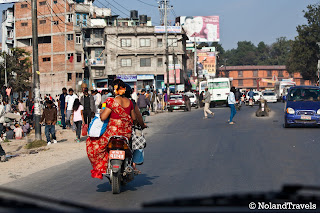 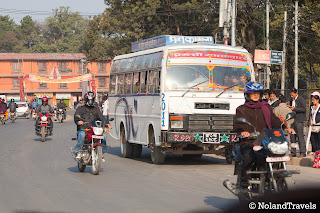 Arrival in Kathmandu was simple thanks to us, I mean Steph, organizing our visas in advance…the queue for people applying for visas on arrival was huge! We made it down to the baggage hall and impatiently awaited our bags. If we haven’t told you previously, we put our backpacks in large bright orange duffel bags when we check them for flights. These bags have saved us once before because they stand out of the crowd, however, in this trekking capital nearly everyone had their backpacks in bright duffel bags! We did find them without issue but unfortunately our friend Ben was not as lucky. His bag just wasn’t there and after we all scoured the halls for an hour he had to give his contact details and they assured him it was probably in Delhi and didn’t make the connection. So, with just the clothes on his back, we set off to grab a taxi.

Interestingly, Nepal is 5 hours 45 minutes ahead of GMT, while India is 5 hours 30 minutes; we think that is an attempt to let the world know they are a different country.

As with most journeys, they begin with a taxi ride which can be such entertainment – and this was no exception! After picking our driver and negotiating price we threw our luggage in the trunk and hopped in. The taxi was a small rugged old (and I mean OLD) 4 door sedan of some kind. While negotiating the price we had only told him the general area we were going so, after learning our exact hotel address he had to check his sat nav – AKA, the other local taxi drivers. Eventually he understood where we were headed and we tore off into the rough, dusty streets of Kathmandu.

Simply said, traffic here is wild. Cars, buses, trucks, taxis, mopeds, motorcycles, bicycles, buffalo, goats and people all speeding down horrendous roads. Actually, Nepal is notorious for having some of the worst roads in the world due to the recurring damage received yearly during the monsoon.

Chatting to the driver, he was extremely friendly. He told us a little about the area and that we had arrived during Diwali.  For Hindus, Diwali is the most important festival of the year and is celebrated over 5 days by performing traditional activities together in their homes.   Many of the houses had festive lights strung vertically from the roof as decoration and shops had strings of marigolds lining their shop fronts. 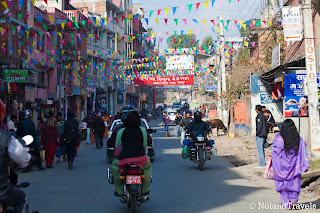 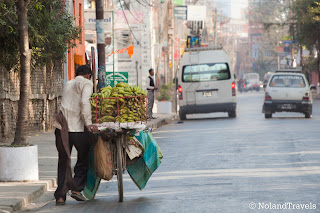 Nearing our hotel, we needed to make a left hand turn but there was a police officer blocking the road. With a simple shake of his hand, we were denied entry – who knows why. The driver, not 100% sure what to do, slowly entered back into the flow of traffic. He then decided to do a U-turn. The only problem was there weren’t any gaps in the traffic. Once we figured out what he was trying to do it was clear it wasn’t going to be pretty. Lots of cars, bikes and buses, all honking at us, zoomed past. He slowly started just turning in front traffic. Some would stop, others would dodge us but go on past with horns blaring and lights flickering. However this didn’t faze our driver. He methodically inched to the other side of the road and when he ran out of room, simply stopped, put it in reverse, made himself some space and finished the turn - almost like he was the only person on the road. At one stage we were perpendicular in the road blocking everybody. The windows were down and I can still hear the horns and see the headlights of cars and mopeds starring us down, inches from the door, as we sat helpless in the middle of the road. Eventually he got us going in the other direction and after one more “local sat nav”, he dropped us off at the hotel. Of course in somewhat of a stunned manner, we had a good laugh at the calamity - good fun!

Reaching the hotel we dropped our bags and hit the streets to find some dinner. Here we met a retired lady from Maine that was traveling in Kathmandu for 30 days who gave us some friendly advice. Its an interesting thought to just pack up and move somewhere for 30 days, but she seemed to be making the most of it – also working with a local ladies fabric cooperative to help re-sale handmade fabrics. So, after enjoying a good chat with her at a shared table, over our chicken sizzler dinner (skillet cooked chicken and noodles in a gravy), we headed back to the hotel to catch a decent night’s sleep.
Posted by Unknown at 12:25 PM