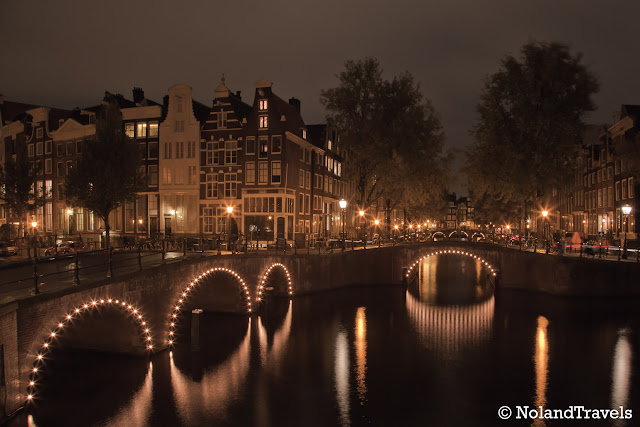 Steph is lucky enough to have a work client in Amsterdam and was able to work there for a few weeks.  So never missing an opportunity to do some traveling I flew out Friday after work for the weekend.  From London, Amsterdam is a great weekend trip.  The flight is only an hour and flying from London City Airport which is mainly a business traveler airport, you only need a few minutes to check in, get through security and in board your flight.  In Amsterdam the airport is only 15 minutes by train to the city center which makes it incredibly easy to get in and out.

One thing that Amsterdam provides is a wide range of things to do.  I know, I know, its famous for its red light district and party atmosphere but it also has a wide range of higher brow culture.  Plus you get to wandering through the streets admiring the canals and bridges. When you get tired you just stop in a brown cafe to relax. To clarify these are not the same as the coffee shops! They are Amsterdam's version of a pub, taking their name from the brown walls inside after years and years of cigarette smoke. It sounds crazy but they are warm and cozy places and a must do on any visit. 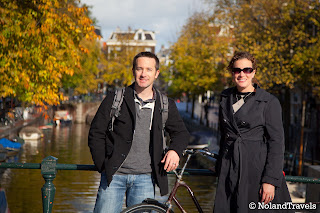 We had a nice and chilled out weekend.  The weather wasn't great, lots of rain, clouds and cold but we managed thanks to Steph's umbrella.  The main thing on our list was to visit Anne Frank's house.  All of the advance tickets were sold out so we had to wait in line, fighting the rain to get in.  We both read the book this year so it was something we wanted to do.  What a story and what a staggering does of reality. There were no Hollywood endings.  It was an emotional tour.

We also hit the famous Rijksmuseum for a dose of Dutch art culture but mainly wanted to see all the Rembrandt works.  And as always with art work art you've seen in books over the years is hard to believe its actually real!

So all in all a low key trip for us but a good one!

Oh and I forget to mention that we did have Steph's favorite Dutch pancake covered in apples, cinnamon and ice cream, yum!  Now you see it, now you don't...