From Mt Everest to The Temples 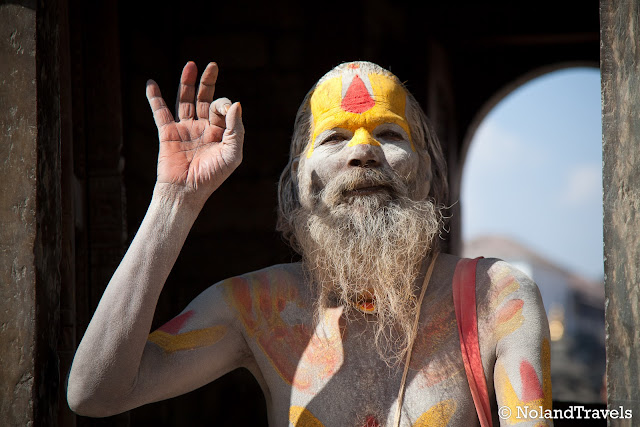 Our only option on this trip to see Mt. Everest was an early morning scenic flight in a jet stream plane run by Yeti Airlines.  We happily took the opportunity having to wake before dawn to catch a taxi to the airport. In the air, we had stunning views of the Himalayas and were even allowed into the cockpit to see a panoramic view of Mt. Everest! At certain points we could almost reach out and touch the snow on the top of the mountains.

After breakfast, we headed for a visit to The Pashupatinath Temple, one of the holiest and biggest Hindu temples in Nepal. Visitors (non-Hindu) are not allowed in the main temple but you can explore the grounds and there is plenty to see and take in. Set on both banks of a river, you first arrive at the crematorium where in the Hindu faith, loved ones are cremated on the bank of the river. I’m trying to keep this as light as possible but it is as it sounds. Bodies are burned on cement platforms built along the river and then the ashes are thrown in to the river after some are collected to keep. Cremation is meant to help the spirit pass in to the other world - the ultimate destination of the dead.  It is a sacred river and a highly sought after location for cremation. 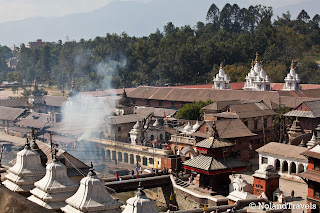 As westerners, we tend to be more hands-off with death but in the Hindu faith the oldest son is responsible for actually setting fire. It is an honor for the son in recognition of the parent who has just died, sometimes only just hours ago.

While we were there, we could see 3 bodies at different stages of the cremation process.  I’m having a hard time summing up and describing my feelings standing across the river watching a cremation first hand. It was simply different and in a way, one of the moments you travel for - to open your mind to new experiences and ways of thinking.  The photo included is from a distance, to help others see and begin to understand a religion and practice that has existed for many thousands of years.  You can see at a high level what the scene looked like.  The river runs in the gap between the buildings in the photo.

Another thought provoking site was a couple boys picking up charred logs out of the dirty river.  The logs could be reused again and have resell value.  They were in knee deep water, digging the logs out of the water, putting them on push carts to wheel them to the bank. 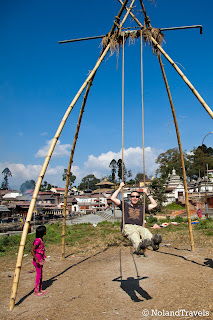 Exploring the rest of the area surrounding the temple we got to see plenty of monuments including some Shiva linga shrines for all you Indiana Jones fans. Shiva is a Hindu diety and linga is a representation of Shiva; the linga's exact meaning being under dispute but largely means fertility the way its shown at this temple. There was also a good view of the temple from the other side of the river where we could watch the followers come and go for morning worship. We found the above holy man sitting in one of the monuments taking in some sun. A few monkeys were bouncing around causing trouble as well.

On the way out, there were some kids playing on a special swing, which looked fun.  It’s made of four huge bamboo stalks shaped into a four-pillar arch with a swing hanging from the top. They are built for kids at New Years (Diwali). Seeing them previously on some of the taxi drives, I couldn’t resist! The guide helped me translate to a couple local kids swinging and I quickly found myself on the swing being pushed by a Nepalese girl. After a few swings I got a little air but more importantly some good fun! Ben joined me and had a swing too! 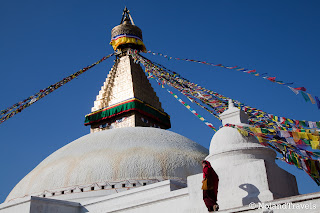 Back in the van, we headed to the Bodhnath Stupa - one of the holiest Buddhist sites in Kathmandu.  There is a big population of Tibetan monks and 50 or so monasteries in the area.  It was a thrill to see the monks wondering around going about their daily lives.  The Stupa is one of the largest in the world, a huge round white structure with a gold tower top complete with a pair of eyes, one on each of the 4 sides.  No one can go inside the Stupa because they have been sealed shut for many years and contain remains of Lord Buddha. They are very sacred places in the Buddhist faith and quite nice sites to visit.

For lunch we had a great view, the photo from the previous post, and our had our first traditional Nepalese Dhal Baat which is a platter of rice, lentils soup, spicy pickle, curried vegetables and a chicken curry as well (if you ordered the non-veg version) (All menus read “veg” or “non-veg”). It was good and hearty!  We also enjoyed glass-bottled Cokes - something we enjoyed throughout the trip!
Posted by Unknown at 2:00 AM