Up to The Monkey Temple 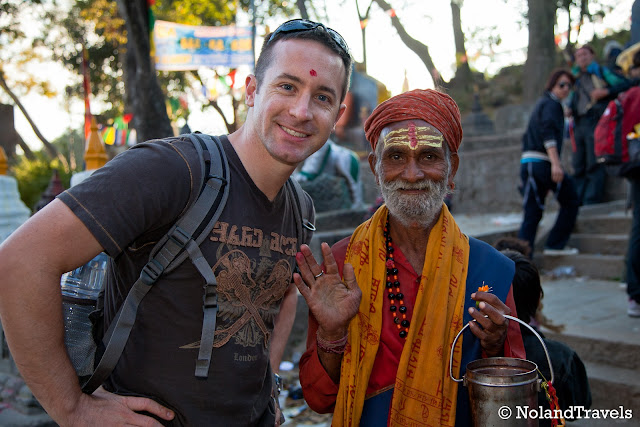 With the sun getting low in the sky, we topped up on caffeine with a coffee and headed off to visit Swayambhunath, also known as The Monkey Temple. To get there, we had to take another taxi ride – so let the entertainment begin!

It was equally as crazy, this time in the daylight, revealing more sights and sounds from this hectic city.  In one extremely quick and tense situation the driver luckily escaped hitting a moped carry 3 generations of a Nepalese family.  I don’t know how he avoided them but he did!  I also snapped these interesting shots as we drove by.  I'm not sure what is going on in the first photo but the second is a local butcher shop which only goes to show that the vegetarian dishes are the better option in this part of the world.  Also, the guy didn't approve of my drive-by-snapshot.

The money temple was built on top of a huge hill with 365 steps leading to it and has some holy monkeys living on the grounds.  The Tibetan name actually translates to "Sublime Trees".  Upon entry at the bottom, a seemingly old holy man came up to us and wanted to put a red mark on our forehead with a bright red powder.  We obliged for the experience of it (and gave him a few rupees).  On top we found another big Stupa and other various religious things, a few monkeys and of course some souvenir shops.  It was worth the climb, as the setting sun really made some of the gold leaf shine.

So now is a good time to introduce our friends Ben who is English and Nora who is French. We met them in Wales 2 years ago when we went coasteering (climbing around the rocky Welsh coast in wetsuits). Its funny to think that we went to Wales to get away and ended up meeting neighbors who turn out to be good friends.  Anyway they rock and are good travel buddies. 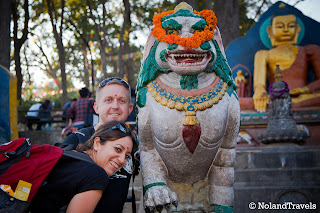 I frequently run into Ben on my commute so we catch up at the pub as well. Earlier this summer, they played a big role in my surprise birthday party. I still owe him for that one... When we heard they were taking this trip it didn't take much convincing to get us to come along as well.  As for Ben's missing bag...fortunately, it arrived that afternoon!

Our time in Kathmandu was short but throughout our visit, we kept being amazed that this country was in such political unrest as early as 2 years ago.  With the monarchy dissolved and the royal palace turned in to a museum, we were truly visiting after recent significant changes. All in all, we only saw a small piece of Kathmandu and the mighty Himalayas but it was well worth the experience and left us thinking of a return visit someday to do some trekking or as Ben wants to do, climb Everest!
Posted by Unknown at 2:00 AM