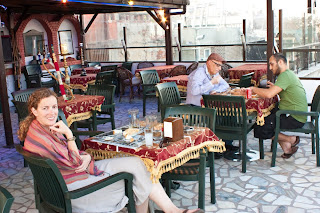 I could go on for days about the sights in Istanbul. The Aya Sofia – an old church turned mosque turned museum, the Sultan Ahmet Mosque better known as the Blue Mosque, the many bazaars, the palace… they were all so incredible to see and shouldn't be missed. As strange as it may sound I instead want to talk about the roof tops of Istanbul. You can find roof top terraces in the form of restaurants, cafés or bars all over Istanbul. Sitting out in the warm summer evenings, with a sea breeze blowing, made enjoying the views of Istanbul and the Bosphorus so memorable. Looking out at both Europe and Asia was such a thrill.

One afternoon we sat and watched the sun go down, on a roof terrace of course, where we met an entertaining fellow named Mario. He was a British guy working in Istanbul and a life long traveler. This was his local. He is playing a friendly game of backgammon in the background of the photo. After talking for a few hours we joined him for an ice cream at his favorite shop followed up by a Turkey history lesson over a late night tea – commonly referred to as a ‘chai’. 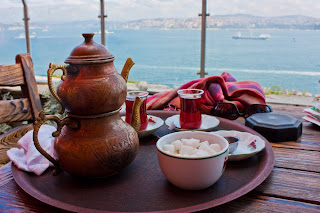 Now, before researching Istanbul I had always heard of Turkish coffee and after visiting Istanbul I’m not sure why. Although I did have a Turkish coffee, the people seem to rarely drink it opting instead for a ‘chai’ tea. It is a strong tea served everywhere in odd hourglass-shaped glasses. Everybody drinks it throughout the day and besides being good to drink, it is cheap. We found it to be a great excuse to stop and relax while touring around.

One thing we didn’t realize before arrival was that we’d be there during Ramadan, the Muslim religious month for fasting from dawn to dusk. There were big crowds on hand to celebrate Ramadan and a festival-like atmosphere set up around the blue mosque. We hung out here one evening and took in the sights and sounds, even sampling some interesting Turkish treats.

Hearing the last call to prayer for the day, we decided to cap off the evening by following all of the prayer goers into the Blue Mosque. Shoes off and Steph's arms and shoulders covered, we made our way into the mosque. What a site! The walls and ceiling were covered in blue mosaic tiles, with massive round columns supporting the huge dome. The huge carpeted prayer area was lit up by large low hanging chandeliers. After being ushered into the visitors section we sat and watched as they prayed signaling the end to their day.

Photos
Posted by Unknown at 4:45 PM