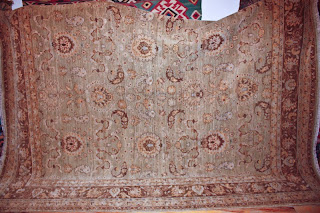 Carpets, carpets, and more carpets. A trip to Istanbul is not complete unless you have a carpet buying experience which isn't hard to come by even if you weren’t looking to buy a carpet. Let me tell you about our experience.

It was our first morning. We slept in a bit but then set out to explore. We were in the Hippodrome near the Blue Mosque having stopped to look at our map to figure out if we were on the correct road. A well dressed man in khakis and a polo shirt (with an embroidered South Carolina logo) was walking by with a young lady and he said “Do you know where you are going?”. Even though we said yes, we did, we somehow found ourselves in a conversation with them, mostly due to his American accent. He was out with his niece, in town for Ramadan, and he is an exporter – he sells big, expensive carpets in the US in Florida. Since he mentioned he was a carpet exporter we started asking about carpets and where we should go if we were interested. He made it clear that he only did exporting so we saw his advice as unbiased. One thing led to another and he said he could get one of his employees to teach us a few things about carpets.

Before we knew it we were being escorted by his niece (he had to go meet a friend) just a couple blocks away to a house with his and his wife’s name painted in a flowery sign above the door. Quaint, right?

Walking in, the place was like a museum, with old masks, cloaks, rugs, etc everywhere! They had stacks of folded carpets down every hall, most stacks at least 6 feet tall. The employee took us to a room and laid out several carpets and said can we pick the 2 real carpets out of the 8 he presented. We picked one of them. He then proceeded to go through each carpet explaining how we could tell it was a not 100% genuine. He also took a lighter to the wool carpet to show us that it doesn’t burn (burning wool smells like burning hair, by the way – it doesn’t burn but it stinks!).

So after the lovely little demo, which we could tell was well rehearsed, he started showing us some of their carpets. They make most themselves in Turkey but also buy a few from places like Iran. Another guy showed up and started helping show us their carpets, unfolding the 8x10 rugs one by one starting a massive pile in the middle of the room. Undoubtedly, there were a couple that we really liked. When they had about 25 rugs unfolded and stacked in the floor, they started taking them away, asking what we thought of it. They were selling us a carpet! Narrowing the stack down to the couple we were interested in! The afternoon had morphed from a “have my friend teach you about carpets” to “the original guy coming back and starting to talk price saying he doesn’t normally sell directly to individuals”.

To wrap up this long story, we did not get back to London with a carpet. For starters, the nice carpets are very expensive. Our favorite is the one pictured above.

In hindsight, we were so impressed with the casual way that he “picked us up” on the street. It seemed a truly chance meeting and casual conversation that led to a 3 hour carpet buying experience! We didn’t feel like we were targeted until afterward when we trying to piece together exactly what had just happened. And we realized how he actually gathered lots of info about us in our “casual conversation” – information that let him know we could be potential buyers. In the end, that was the biggest swindling we had ever been a part of and we didn’t even know it until afterward!

I actually googled “carpet buying experiences in Istanbul” when we got home and I found one person’s blog who said they were in the Blue Mosque area and someone asked “Do you know where you are going”! Simple words – non-intrusive, polite, casual – but the key phrase to say “you’ve been targeted!”

(We’ve got his business card, in case YOU are interested! They do make lovely carpets – we do think he is a legit business – I googled him too. He is recommended by a couple tourism guides as “appointment required”. His spiel about not normally selling to individuals is a fib to make you feel like you have a rare opportunity in front of you, but his carpets are beautiful and appear quite high quality. If we were to buy a carpet in the future, we might go back to him, although fully aware the next time!)
Posted by Unknown at 5:04 AM