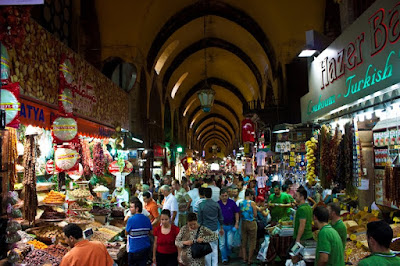 From the massive Grand Bazaar and quiet Arasta Bazaar to the aroma filled Spice Bazaar above, we had such a good time wandering around the busy narrow streets containing the bazaars. As you could imagine you could buy anything and seeing it all was fun. Of the bazaars we visited my favorite was the Spice Bazaar where the mounds of spices and turkish delights were fascinating. Just outside it there was also a huge outdoor "pet shop" where you could scoop out your pet food from one of the some 30 varieties just like would the spices, along with buying your live game bird for dinner that evening. 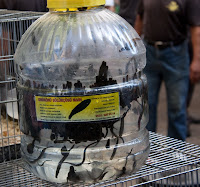 The most interesting item for sale we saw had to be in the "witch doctor section" where they were selling LEECHES in big plastic jugs half full of water! I guess people just rock up and take home a bag full of leeches to treat themselves. Weird!

While exploring the Spice Bazaar we decided to buy some Turkish delights to take back to friends and coworkers. At these bazaars the name of the game is negotiating. We stopped in at one stall selling loads of spices out front and Turkish delights inside. Getting to know the salesman, I quickly made friends. When you want something in Istanbul everybody is your friend especially once they realized you are actually interested in purchasing something.

Talking to him he let us sample just about everything. This shop and many others like it have big cases of honeycomb literally right out of the hive ready for sale. It’s not like going to your local super market and picking up a jar of honey. Here you buy the comb full of honey. Its sort of like buying cheese at a deli, you just say how much you want and they cut it off for you and package it up.

Knowing we couldn’t really take any with us I asked for just a taste. After a strange look the the guy said, “Nobody ever asked for that before, but why not”. So he cut us both off a piece to try. You basically just chew out the pure sweet honey goodness and spit out the wax. Score - one giant sugar rush!

In the end, he gave us what seemed like a good deal on Turkish delights. I was able to negotiate him down to almost half the original price. Happy as could be, we left with 1.5kg of Turkish delights sealed up ready for a flight back to the UK.

Our last morning, Steph decided she wanted to have a Turkish bath. I passed on the experience but here’s her morning experience in her own words:

“I left the hotel quite early, around 7am, and made my way a few stops on the tram to find one of the more popular bath houses. The Turkish bath is a combo of sweatin’ it out in an intensely hot domed room and then having a massage/bath scrubbing from one of the bath attendants. I was one of the first people there with only one other bather in the hot room (another tourist – from England). So, we both had the little chat of “do you know how this works?” and since neither of us did, it was quite entertaining to see her go first! They take a little scrubby mitt and a mass amount of suds (I’m talking mounds (!) of silky suds all over you while you’re laying down) and scrub/massage you head to toe. Then, they take you over to one of the marble sinks, you sit on a low marble ledge and they even lather up your hair and dump buckets of hot water over you. At that moment, I felt very much like a muddy dog getting washed in the backyard – not the most posh spa-like experience – more utilitarian. But hey, it was fun. I did get a proper scrub down, sweated it out as much as I could stand in the hot room (laying on hot marble can only be tolerated for so long before you feel like you will melt and become a puddle in the floor!), and I even had a dip in the hot tub. The bath house was very pretty – the hot room being all marble – floor to dome, with little archways that lead in to the little rooms where you have your hair washing. The actual baths (large hot tubs) vary across bath houses but this one was quite modern. They also have a lounge where you can relax in your robe afterward having a fruit juice, a chai or a nap. Also, as pretty as I thought it was, they say that the men’s sides of the bath houses are always so much nicer. Oh yeah, there are two sides – one for ladies and one for men. All in all, it was a neat experience!”

Finally, to wrap up Istanbul I wanted to tell everybody how much we enjoyed our time there. It was such a fantastic mix of Europe and Asia. It is as raw as it is civilized. It’s a city that can satisfy all sorts of travel desires. From unscripted Asian experience to get of your comfort zone to European city style historic site touring and comforts. If you are looking for some place different and exciting you should give a strong look to Istanbul and Turkey.
Posted by Unknown at 7:00 AM