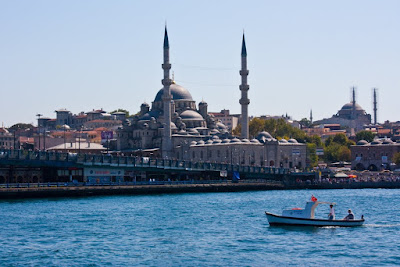 The trip to Istanbul, our first to the Asian Continent, didn't get off to the best start. We knew ahead of time we had to buy a visa on arrival and took enough British Pounds to do so, opting for our normal technique of getting local currency after landing from an ATM. At the front of the line in passport control a Turkish man asked for our passports and said 40 dollars please. Thinking it was a translation issue we slid our pounds through the window at which point he looked up holding our passports shaking his head saying we must pay in US Dollars or Turkish Lira. So to make a long story shorter, we could not pay in British Pounds like most of the rest of the passengers on the plane because we had American passports. For some reason you can only pay with your country's currency or in lira. We had neither. On a side note, with negotiations in progress to join the EU, Turkey may want to think about fixing this policy.

Leaving Steph by herself and handing over my passport to security, I was escorted out of passport control to an ATM to get cash. This shouldn’t have been a problem but my card didn't work due to a “Card read error”. With no other option I headed to the dreaded money exchange window and swapped my pounds for lira.

Escorted back to passport control we again tried to buy Turkish visas only to be a few lira short due to the fees from the money exchange. Are you kidding me! Luckily another traveler, a Canadian girl, had the same problem and lent us the money to buy our visa's to get through passport control.

Finally allowed to enter Turkey we tried Steph's ATM card but it failed too. The same card read error. This was starting to get old until a bit of persistence paid off when we tried the last machine on the other end of the airport that happily accepted our card and gave us much needed Turkish Lira. Whew! 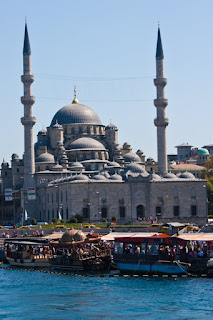 Outside the airport we found a shuttle and soon were at the Asian shore waiting on a ferry to take us to the Sultanahmet District on the European side of Istanbul. The ferry ride treated us with some fantastic views of the sights to come. In fact we were so smitten taking photos from the ferry's top deck that the ferry pulled into our stop and then left again before we could get off! Again, are you kidding?! I’m not sure what to say here but I guess we were totally off our game with the airport fiasco and now this.

After scampering down to the lower deck and trying to communicate with the boatmen, we found out our ferry was jumping over to the other side (the other European side only 2 minutes across the river, not back to the Asian side which is a half hour away), then coming straight back - good news. Now that we were watching the ferry stop process, we quickly realized they only do a slightly prolonged touch-and-go. All of the commuter ferries have a huge tire on the front allowing them to slowly bump into the dock long enough for people to quickly jump on or off. They don’t always stop and dock. Lesson learned.

Back to try again, we jumped off the boat to a fairly hectic scene. In the heat of the day, sun blazing down, taking it all in was great. People everywhere hustling to get on and off ferries, busses honking, trams dinging past on the nearby bridge, taxis in the background honking and zooming past, people selling anything and everything all supported by the sea traffic’s engine hum, arrival horn blasts and resulting waves crashing into the sea wall. It was a brilliant welcome to vibrant Istanbul.

Through all of the commotion we noticed about 3 or 4 boats lined up, all very ornate, rocking heavily in the surf and all serving fresh fish sandwiches. How could we pass this up? (Plus, we had heard about them thanks to good 'ol Rick Steves) Stepping up and placing an order, I watched the grill man, below take a piece of fish off the grill, stick it in a crusty roll, cover it with lettuce and onions, douse it with lemon juice and hand it over to me in trade for a couple lira (less than a pound!). Verdict: not too bad. Would pass on the onions if we did it again. 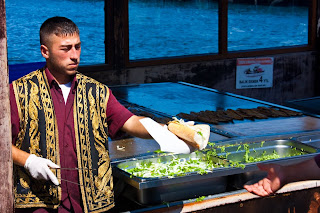 All was now going well. We were sitting and enjoying our fish but then I noticed out of the corner of my eye a young boy running up to the table selling something, which turned out to be tissues. I instinctively grabbed one of my bags and pulled it closer. Well this offended him. He angrily said “NO NO NO” and shook his finger at me proceeding to yell in Turkish to all his friends doing the same. It was just a reaction; I didn’t think he was trying to steal it. Sorry young Turkish boy, us visitors can sure cause a fuss!

One thing to know is that Istanbul has a very low crime rate. It is a very peaceful city and we never felt threatened or endangered in all of the crowds and chaos that is Istanbul.

Fish sandwiches eaten, we then dropped our bags at the hotel and re-grouped from our rougher-than-normal arrival and headed out to soak up more sights and sounds.

Istanbul Photos
Posted by Unknown at 8:45 AM