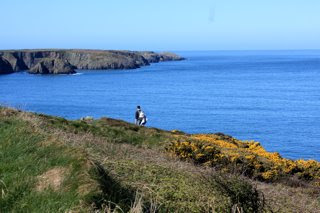 After lunch we suited up again this time, in a less restricting wet suit, and headed to a nice village, Fishguard, where Moby Dick was filmed, to do some sea kayaking. We settled into our kayaks and paddled up the coast line dwarfed by the tall rugged cliffs. No seals this time but we did stop and watch some interesting birds that are related to penguins, which are known to be terrible flyers. They live on the cliffs and spend all day trying to land on the small ledges. When they leave the ledges instead of flying up they drop like stones going almost straight down even though they are flapping their wings like mad. Getting back to the ledge is even more of a challenge because they keep having to circle because they change there minds at the last moment which is fairly entertaining. They head toward the ledge then at the last second circle around for another attempt and can spend hours trying to land.

With the sun setting we headed back to the lodge for dinner and a bonfire. The sky was clear and the fire was great. We roasted some marshmallows (they don't make good marshmallows here!) and entertained the the non Americans with stories of S'mores then called it a night. We were exhausted.

The next morning we had our last event of the weekend - a 7 mile hike along the Pembrokshire coast line. The weather was bright and sunny so the hike was very enjoyable. We walked along the coast high above the sea in and out of little sea side villages making our way back to the lodge.

After taking it easy the rest of the day on Sunday, actually getting sunburnt, we set off for the drive home the next morning. We stopped off to tour a coal mine called Big Pit which supplied much of the coal to drive the UK's industrial revolution but has been turned into a museum. We put our hard hats and lights on and toured the actual mine. We left thinking, why hadn't we done this in KY or WV where we still mine coal.

Arriving back in London there were protests in front of Parliament blocking our preferred route to drop the car off back at Waterloo station. A few detours later, a wave to the queen and a "Hey look kids, there's Big Ben..." we were able to find our way back to drop the car off. Oh and a tip for anybody renting a car in London, ask for a Hybrid because you don't have to pay the congestion charge which can run 8 pounds a day.

We went to Wales to get away and that is what we found. Fresh air, open spaces and adventure. We made some new friends, funny enough one girl was from Northern Kentucky and another couple live around the corner from us in Clapham. Small world huh?

Here is the photo link in case you missed it.
Posted by Unknown at 11:08 AM