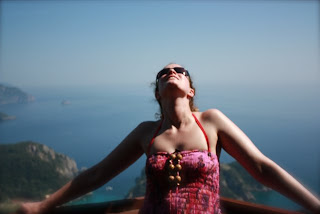 I'm not sure you are going to believe this but we just got back from a weekend in Greece that we booked the day before. So less than 24 hours later we were sitting on the plane cruising at 33 thousand feet to the island of Corfu at a staggeringly cheap price. All the better right...

On arrival in Corfu all we had was the name of the hotel, the city it was in, and a picture of it. No directions, address, maps or arranged transportation. I know its not like us but in the rush we didn't get to those details. To sort out transportation we headed straight for the rental car desk and in less than 10 minutes we were in the car and on the road all before the rest of the flight was through baggage claim. Traveling light does have its benefits. So with a map from the rental car company and a few recommendations from the lady working the rental desk we set off.

Driving up the coast we stopped in the village of Kalami. Strolling along the quiet beach we found the recommended taverna. It was a great time to get out of the afternoon sun and relax. We enjoyed some excellent humous and some local sourced calamari. The taverna had a fantastic open air patio covered in grape vines shielding us from the sun but allowing the breeze to make it a relaxing few hours.

Now the challenging part. Finding our hotel. We drove to the town of Sadari where the hotel was and after a few minutes of driving around aimlessly we gave in and asked for directions. It took a couple attempts but we finally found it. The picture came in handy because there was no name on the hotel.

Dinner started out great with a seat at another taverna on the beach as the sun set. We had some delicious tzatziki and Steph had a bowl of olives all to herself. It was "Greek" night which at first seemed nothing special but turned into quite the spectacle. It started with some dancers doing their Greek dance to some music. Then they lit the floor on fire in preparations for the big finale. Music playing we all stood there in awe as the floor in the middle of the restaurant was in flames as the guy kept fueling it. I took a short video in case you don't believe me. After they put the fire out they gave us all plates to throw at the feet of the dancers during the final dance. Check out Steph, how cool is that!

With a great day in hand we took a walk on the beach. The only problem on the day turned out to be the flip flop that I blew out on the way home.

The next day we let the sun wake us up and headed back to the beach for breakfast. All of the tavernas/restaurants have beach patios which make for incredible dining. We ate breakfast and sipped coffee all morning enjoying the warmth of the sun and calm of the beach and ocean views.

As usual we couldn't just sit around all day at one beach so we headed off to do some beach hopping. Driving in Greece is quite the experience. The roads aren't the best but quite adventurous. They go from nice paved roads to bumpy hardly call that a road, in and out of tiny villages with one way passes. After a few beaches and some good high views from above we hit the jackpot.

The road took us well up one of the mountains where a cliff side taverna was calling our name. We sat literally on the edge of a cliff staring down below and a fantastic set of coves and beaches having lunch. We made friends with the local owner who recommended the kebab meal that wasn't even on the menu. It really hit the spot. The photo was taken just after lunch.

So what do you do after a big meal late in the afternoon...nap on the beach, of course. We made our way down and spent the last few good hours of the day snoozing on the beach.