Winding up the short trip to Corfu 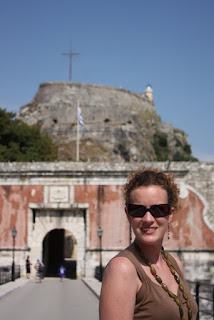 To answer my previous question we had our drinks and moved on. As a traveler in unfamiliar environments you can never be too cautious. When something seems a bit off you have to take notice.

"We are just going to have drinks. We had a late Greek style lunch and just aren't hungry." Then we endured the following slightly uncomfortable minutes while we finished our drinks and enjoyed the view.

Afterwards we found a local fast food kebab style place and had a good simple dinner. It turned out to be a better option.

The next morning was already departure day and we only had the morning hours before we had to head to Corfu town and the airport. Up early we headed to the beach for breakfast and some last minute sun. At 8:30am we were no joke, the only tourists on the beach. The restaurant workers and beach hut workers were there setting up shop, but weren't open until 9am. It was kind of nice "owning" the beach for the morning. Oh, and even by 11:30 when we packed up there were only about 20 people in site. It was sunny and hot so I'm not sure why it was a slow day.

Arriving at the airport we dropped off the car and checked in for the flight which was delayed. An hour and a plate of tzatziki later, we found out it was significantly delayed - almost 5 hours. Luckily the airport is tiny and Corfu town was nearby so we jumped in a taxi and headed back out for some more sight seeing.

Corfu town was great and would have been a shame to miss otherwise. With fantastic Venetian style buildings, a mighty fortress castle as you can see with Steph above and great bay to see. We strolled the streets then found one last taverna for a snack before heading back to the airport.

For once we were glad the plane was delayed because it gave us more usable time to spend on the island.

Before this trip I thought last minute travel was a myth. Even saying so out loud looking at some of the prices for airfare leading up to the trip. I may of even said something about lastminute.com needed to change its name, but I was proven wrong.

It was an eventful and extremely enjoyable last minute trip that we concluded was so good because we had zero expectations. We didn't have time to plan or research anything, so everything we did and ran across was a surprise. :) We're going to try to do this more often.

Enjoy the photos
Posted by Unknown at 10:06 AM