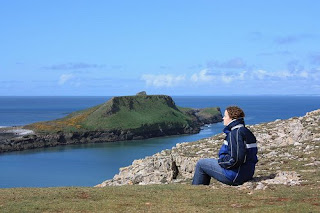 We were starting to get a little stir crazy with winter winding down. To escape we booked an Easter bank holiday weekend trip to Wales. Rugged coast line, beautiful countryside and best of all, sparsely populated outside Cardiff and Swansea.

To make the most of the long weekend we took off after work opting to do the easy but boring motorway driving to Swansea.

One quick side note. Driving into Wales on the M3 you cross a great bridge across the bay where you have to pay toll. This is when you see that the pace of life has changed. Things instantly SLOOOOW down and from the non stop, out of my way attitude in London to the "Have a lovely evening" way of Wales was a very welcome way to start the trip. Even if I did have to pay toll for it.

Knowing we'd be getting in just short of midnight we opted to stay at a cheap sea side B&B in a little place called Mumbles. Well cheap is what we got. It was a bit rough but luckily we only had to sleep and go...

A major theme for the trip turned out to be the weather. Wales is known for its unpredictable weather and there were no guarantees we would even see sunshine but we did and lots of it. What a change from the winter gray of London.

From here a buddy of mine from Wales recommended we explore the Gower, a little peninsula sticking out below Swansea where he was from. We drove around the peninsula ending up in a fantastic village, Rhossili, at a place called Worm's head. It is a little island stuck out off the coast. Possibly resembling a worm's head? We walked along the high cliffs out towards the island that is only reachable in low tide.

From Rhossili we headed towards our main stay near the village of Mathry stopping along the way at a fantastic castle. If you don't know Wales its the land of castles. Throughout the centuries everybody wanted their own piece of Wales so in defense they built castles and lots of them. This particular castle was stuck on a hill top with a staggering cliff face. Check out the photos. Very cool. I'm not sure if you can see it in the pictures but there is a man made walk way built out on the cliff face leading to a natural cave which was fun to explore. Steph got a big kick out of taking our small flash light and leaving me in the dark. Not funny Steph!

After a bit of castle exploration and a few pictures we set off to the main attraction. Our Adventure Cocktail Weekend. A 2 day adrenaline filled weekend of coasteering, sea kayaking and hiking on the rugged coastline all staged from a 5 star ecolodge. Green and fun, what a combination! All provided by our friends at Preseli Venture.

I'll start with the lodge. It was a very camp-like atmosphere. With housing facilities for 30+, all full for the weekend. Some of the rooms had bunks for 6 or more and a big room to eat and hangout. Meals were served all at once and were a very hearty mix of soups, lasagna, jacket potatoes, ect. By "Eco" they really mean self sufficient. They would never say but I'm guessing it was geothermal powered. They used ecotricity and the building was built to maintain all the heat possible plus, as everyone should, they made huge efforts to recycle everything.

Now back to the events. First up Saturday morning was coasteering. Yep - you read right so what is coasteering. Its a combination of swimming, climbing, jumping off cliffs through sea caves, up and down with the sea swell all in the frigid ocean which even in April was a staggering 7 degrees. ( 40 Fahrenheit ish ). Luckily full winter wet suits were provided along with gloves, booties, buoyancy aides ( haha ) and helmets.

Once at the coast we made our way down to the sea, sun shining and waves tumbling. We all took a big gulp knowing what we were about to do. As we edged into the cold water it hit us. The water was so COLD it was almost painful. In fact, it was painful.

Eventually the wet suit did its job and we started to warm up, sorta. Then a distraction. A bull seal, how cool! It came to investigate and then was off. Game on.

Up and over rocks, swimming through little coves dodging the surf we went. Jumping off into the water at different points was the best. The last jump was 25ft up and was exhilarating. Just the pure shock of it all. The water was so cold, on the rocks the sun warmed you up and then nervously jumping off back into the cold water adrenaline pumping all the way.

Before I go for now, I should say I froze the whole time. The wet suit helped but not enough. Steph had a hard time breathing deeply - it was so cold! After more than 2 hours we were ready to get out! The hot chocolate afterwards was needed but I'd still recommend it to anybody with an adventurous spirit. It was a fantastic way to spend a morning.

Kayaking and hiking still to come.

All Wales Photos
Posted by Unknown at 5:39 PM