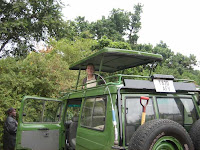 Our Safari started at the Lake Manyara National Park. It is a smaller park that gave us a good start into our safari. In the picture you can see our safari vehicle. The roof pops up for optimal animal viewing.

After entering the park the first animals we saw were elephants. We turned a corner and there was a family of elephants blocking the road. It was a male and female elephant with their little ones. We watched them for quite awhile but eventually they decided they were tired of us so the last one let out a silent, but deadly, elephant fart and as they strolled off into the jungle. And YES, elephant farts stink. We didn't stick around much longer.

At one point during the morning drive we found ourselves stopped looking at a family of hyper monkeys on the right side of the vehicle and a family of bandit mongoose on the left side of the vehicle. A few minutes pasted when our driver noticed an eagle high up in a tree straight ahead. All at once the eagle took off and everything went into action. The monkeys starting sounding off to each other while they dashed for cover...up into the trees and into the bushes. On the other side, the mongoose simultaneously did the same disappearing act. They were all locked on the eagle in defensive mode. It all happened so fast. In case you didn't realize, this eagle eats animals such as these small monkeys and mongoose.

When we stopped for lunch at a picnic site we were with a group of other tourists. After one group of people finished the mother and daughter starting walking away from the site towards the lake. They were a ways away before the driver noticed and starting yelling for them to come back. "Hey. Come back. Its not safe to be walking out there". Think - you are in an open park that inhabits lions, leopards and other large wild animals. Stupid tourists...

Finally on our way to the lodge we met a family of baboons walking in the road. Here is a photo one of the baboons sitting on the guard rail. Not a bad photo.

Next Up: Ngorongoro Crater
Posted by Unknown at 3:52 PM