Safari Day 4 - Sunrise over the Serengeti 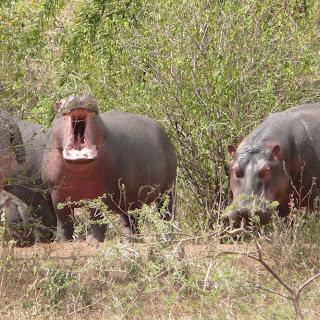 We had our driver pick us up early, 6:30am, so that we could see the sun rise over the Serengeti. As we headed towards the game areas, we had several beautiful sunrise moments.

Today's mission was to spot some large cats as they tend to hunt in the early morning. As we drove around, the silence of nature was amazing. With the vehicle stopped, engine off, the delicate sounds of grass chewing, a few gentle steps and the occasional trot, made a peaceful soundtrack to the spectacular views. There were also fields as far as you could see full of gazelle and zebra.

During the early morning drive we found a pack of hyenas that were following a male lion. We came to find out from our driver that the hyenas thought they were following a female lion hoping to chase her off of an eventual kill. As the lion continued they soon realized it was a male lion and dispersed. It wasn't a total loss because the lion walked directly in front of our vehicle as he sauntered across the road. See this short video of the lion.

After a couple more peaceful hours of morning drive, with no major sitings, our driver started cutting through a field. In some parts of the park you are allowed to drive off the paths which can be helpful due to the size of the park.

We saw a few vulchers circling above and then saw movement in the tall grass as we drove closer. We spotted more vulchers finishing off a recent kill and not too many paces away were two cheetah. They were walking away having just given up their leftovers to the vulchers.

We followed the cheetah across the field where they stopped to sit on top of a dirt mound for a good view. Then we noticed the cheetahs were surrounded by lions. On one side was a lone lioness on the prowl. On the other was another lioness with her two cubs. Since none of the cat species get along the cheetahs were trying to avoid any contact with the lions by laying low not moving or drawing attention.

We were able to get extremely close to the cheetahs on the mound. It was one of the best moments of our safari, rivaling one of the lion hunts in the crater! The cheetahs were so amazing, too bad we couldn't have seen them in action at full speed.

We saw quite a few other animals and the only other thing to mention is a leopard we found sleeping in a tree that had carried its kill into the tree. Unfortunately it was quite far away so the pictures didn't really turn out.

Finally the picture is of a yawning hippo.

Next Up: The Journey Home
Posted by Unknown at 2:11 PM