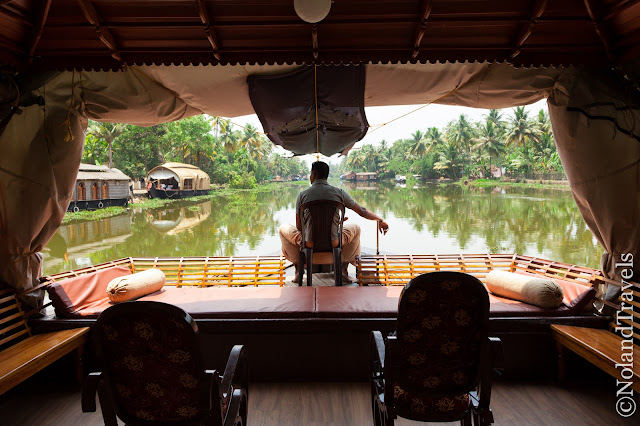 Our driver picked us up early in the morning for a short drive to Kumarakom, the departure point for the ever popular Kerala backwater boat cruises.  Saying goodbye to our hosts, all we really knew was we were scheduled to stay overnight on a boat that would be exploring the "backwaters".  Knowing India this could mean anything from a luxury 5 star cruise to a raft floating on a polluted river.  It came highly recommended and The Ravindran's were kind enough to make the arrangements for us, so we just went with it. 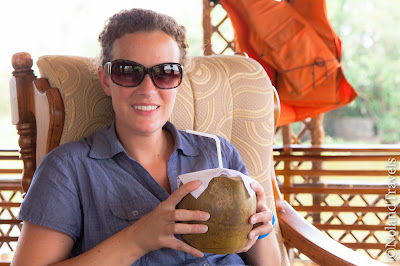 After stopping a couple times for our driver to ask directions we finally turned off the main road. Shortly after the boats started appearing as we drove next to a backwater canal on a narrow dirt road.  We stopped to ask for directions again because we were supposed to meet our contact to start the cruise.  The driver didn't know much more than that so after asking a few people we finally found the right boat. 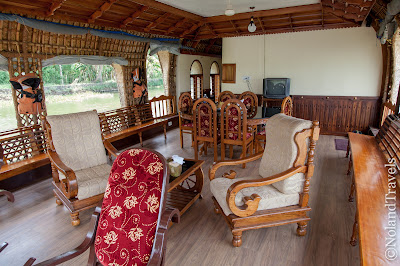 So what are the Kerala backwaters?

In short, they are a set of canals and lakes that feed into the adjacent Arabian Sea that run along a big portion of the Kerala coast. The canals are filled with water plants on the surface and dense palms trees lining the shores.  The green brackish water is a combination of salt water and fresh water and is home to a unique eco system along with being a major irrigation source for the surrounding communities.

In this laid back setting only a boat of a certain nature would do.  Meet the Kettuvallam style of house boat - a more modern invention using ancient boat building techniques to  construct the living quarters out of bamboo, coconut fibre, ropes and thatched roofs.  They are a modern day adaptation from the old rice and goods carrying barges which aren't needed anymore.  Though many have the same general style, the local craftsman are creative so you see all sorts.

On board they have hotel-style rooms with en suite bathrooms and big beds.  The main area is covered but open on the sides with a few chairs, tables and fans all set for relaxation.  At the back is the full service kitchen and all meals are prepared on board. 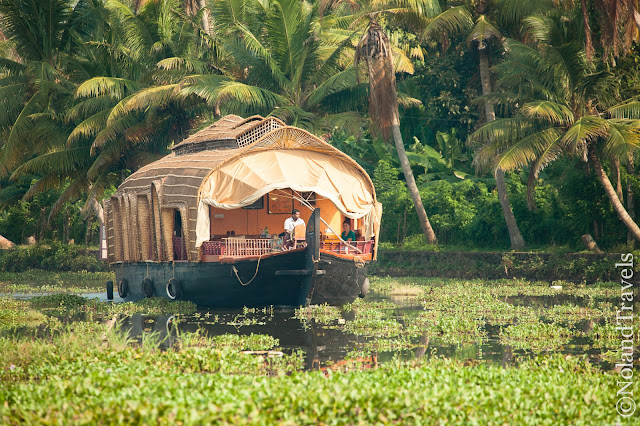 We were introduced to our staff on board - a captain, a cook and a deck hand who welcomed us warmly. The cook said our welcome drinks and snack were almost ready so we grabbed two chairs on the deck to take it all in.  It turned out we were the only guests that night and had the whole place to ourselves.  You can see Steph enjoying, err, drinking her coconut with a straw.  Some are good and others can be more fun than good. 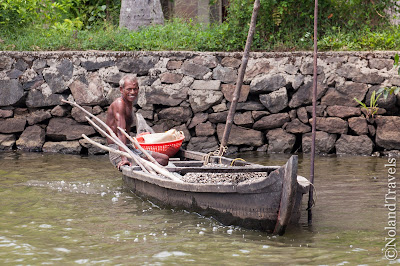 Before we knew it the deck hand was untying us from the shore and the captain was in his front-and-center captain's seat, a fancy plastic chair, at the bow of the boat. 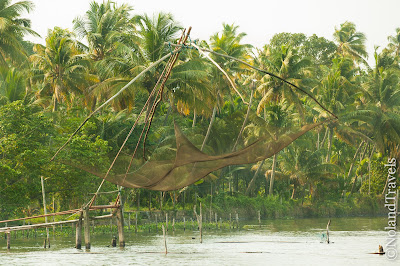 The setting was so calm and peaceful.  Soon enough the cook brought out fried bananas which were a real treat.  Seems this is the norm around Kerala.  Thirsty?  Have a coconut.  Luckily, they know when they are ripe so they taste ok.  Our snack was the tiny sweet bananas found everywhere, fried in a crispy batter.  They were very tasty!


The plan was to cruise out to Kumarakom Lake, stop for lunch then cruise through a few more canals and find a place to stop for the night.

The scenery was fantastic.  As I mentioned the canals were covered in dense sections of hyacinths (lily pad type plant) almost making a carpet to walk on, surrounded by palm trees, mangroves and coconut groves.  There were a few other boats like ours and many of the locals out in smaller more traditional boats fishing.  We passed a few small villages with children out playing in the canals and a few sections of old school fishing nets.  They were a trip and must take quite a few men to operate.


While cruising on the wide open lake we caught this classic india moment. 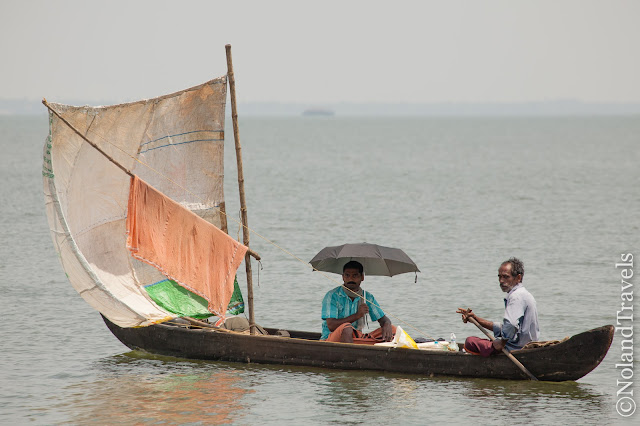 After stopping on the lake for lunch we made our way back through the canals where we stopped for the evening.  The sun was starting to set when a storm moved in.  The captain and deck hand quickly scrambled to get the tarps out to keep us all from getting soaked.  Normally rain is a bad thing but the tranquililty and peace level went to an entirely new level.  Sitting on the boat tied up to the shore on a peaceful canal with the sound of rain gently tapping the lilies and water was amazing.  No sunset today but off in the distance we watched as the storm lit up the sky and soaked the canals.  We felt a millions miles from anywhere, it was surreal. 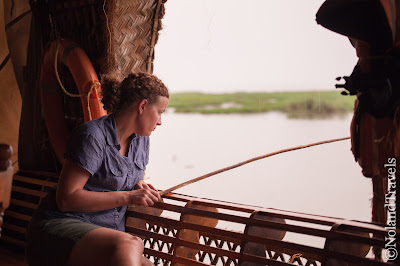 Surprisingly the captain asked us if we wanted any beer.  In this type of setting it would have been a nice treat but we didn't bring any.   He said the deck hand could "run" to the local shop to get it for us if needed.  Sure, we said.  The deck hand then took off into the trees down a small path.  About an hour later he emerged with the drinks we had ordered.  As the saying goes, ask and you shall receive, even if there was a small markup on the price of the beers. 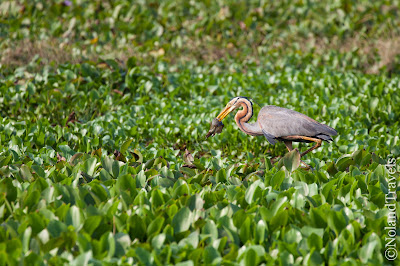 One of our favorite things was the soundtrack they played in the evening.  It was an Indian and Malay soundtrack which set the scene for this amazing cruise.  Dinner was a spicy curry by candle light (they asked in advance if we wanted meat or veggie - we chose veggie - its what they do best!).  Kerala food is so diverse and so tasty! 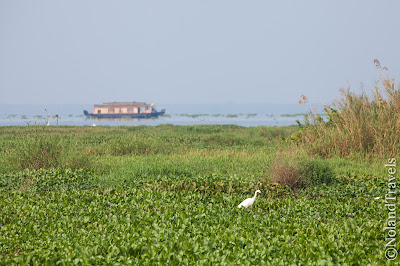 Morning came and we were up early to experience the sunrise on the backwaters.  Overnight a huge section of hyacinths had engulfed the boat which attracted a lot of stalking birds and made for interesting bird watching.  They hunted for their breakfast then had to fight off the other birds to eat it.

After our breakfast we were offered the option to do some fishing of our own.  A small branch and a little fishing line with a hook.  We didn't have any luck but the cook had honed his skills and caught a few hand size fish.


Overall, it was an incredibly fast 24 hours and before we knew it we were heading back to the dock.  By this point in the India trip, we were starting to learn that things really did happen only at a certain pace...and that pace was generally relaxed and fairly slow.  But we were getting used to it!  The house boat was an extremely relaxing part of our trip and we would recommend it to anyone! 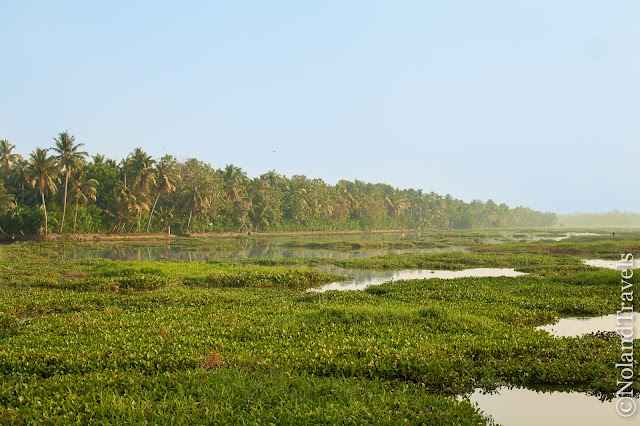