Chips and Gravy at Old Trafford 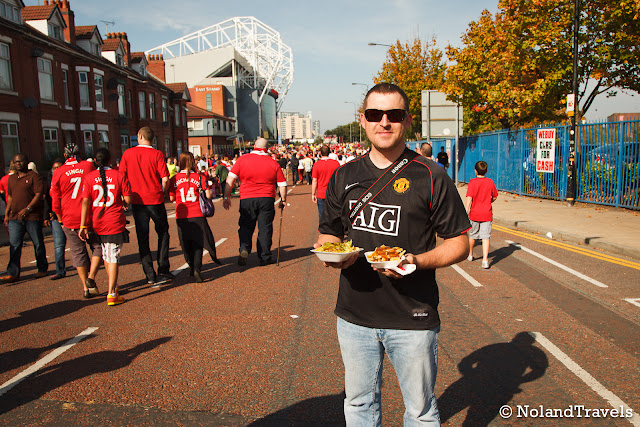 A highlight for many sport fans is a trip to Old Trafford to watch Manchester United play football, err soccer.  The problem is that tickets can be hard to come by.  However, a colleague of mine wasn't using his tickets for a match against newly promoted Norwich City FC, so I happily snapped them up.  This couldn't have been better timing because it was same weekend my brother Zac was in town for a whirl wind visit.

From London it's about a 2 hour train ride north to Manchester.  On the train we sat across from a father and son who make the trip for every home game.  Beside being avid fans and telling us about this game or that game over the years, they told us about a pre-game tradition of eating Chips and Gravy.  Now before you start thinking potato chips, let me clarify.  They were talking about chunky french fries.  You can see Zac above, looking slightly unamused holding two portions, including one with an additional topping of mushy peas.  That's Old Trafford in the background.

The idea is this.  You shove your way onto a packed tram which drops you off a fair distance from the stadium.  The walk then gives you time to stop off stop off for pre-game snack.  You pick from one of the many vendors on the way, all serving the same thing.  Chunky chips with a dose of salt and vinegar, covered in gravy.  Appetizing?  Possibly not.  But good, Yes!  We both devoured our chips along with everybody else, then turned our attention to more important things, the game.

After working our way into the stadium, we found our seats then explored for a good photo ops.  We even had enough time before the warm-ups to join the locals in the concourse bar for a few pints to watch the last 30 minutes of the Liverpool game.  Not surprisingly, when Liverpool scored to go ahead, nobody cheered - except us!   Oops, another pint anybody?  Go United!  Time to duck out to our seats and watch the players to warm up.

The seats were great, on the 3rd row of the upper tier in one of the end stands.  A good view with the rowdy sectio behind n us.  Most of the crowd was calm and seated, but the rows behind us stood the entire game,  cheering and chanting - sorry, most of the chants aren't repeatable here!  The game itself wasn't super exciting but a couple of goals on the end near us delighted the crowd, sending everybody home happy with a routine win for United.
One thing to note is that there are rules to abide by in your seats.  First, no alcohol.  Who'd of thought, but it's needed to make sure people don't get out of control.  It can get heated in the stands between the home and away fans.  Second, photography is limited to point and shoots!  I started to argue with the security guy who took offense to my camera but I decided I'd rather watch the game.  Plus Zac told me to shut up and pointed he didn't want to get kicked out of the stadium.  Thanks bro!

All in all, it was a good way to spend the afternoon on a fantastic day in Manchester.


The only thing left to do was to head into the center of Manchester and celebrate the win before our late night train home.  We meet a good friend of mine in town who showed us around.  Surprisingly, Zac made finding a pub harder than you'd think.  Notice his ManU jersey above?  On game days pubs have a decision to make.  They can do 1 of 3 things.  Allow home team fans in, allow away team fans in, or neither.  We weren't allowed into the first two pubs, both not allowing either team fans in, before finally finding a United supporting pub.  Again, who'd of thought, but its for safety.  Too many drunken fights I guess.

Well, rowdy turned out to be the theme of the day.  On the packed train ride home there were quite a few loud rowdy fans from the game.  The dinning car was closed and numerous announcements had to be made that calumniated in the police waiting on our train platform as the train pulled into London Euston.  It wasn't us! Rock! 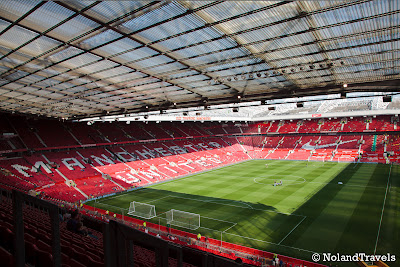