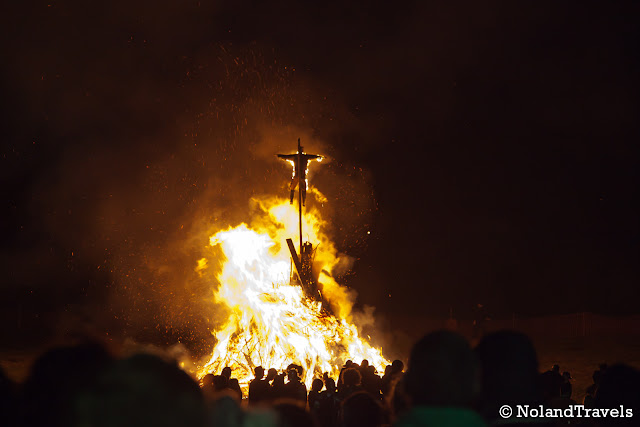 Remember, Remember the 5th of November so goes the rhyme...

On the 5th of November, 1605, Guy Fawkes was arrested guarding a cache of gun powder and explosives hidden under the House of Lords in the Parliament building.  He was part of a group trying to blow up Parliament and assassinate King James I.  Luckily this failed, preserving the famous landmark, but also providing a fantastic way to spend an evening each November. 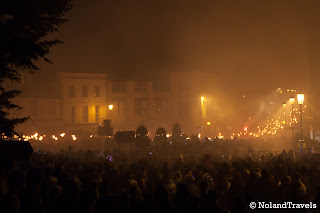 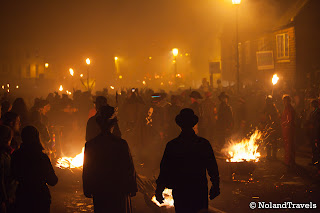 In response to the failed attempt, King James allowed the public to celebrate with bonfires.  This tradition has stuck around over the years and every November 5th, people all over the UK get together to light fires and shoot off fireworks saying, "Remember, remember the 5th of November..."

These celebrations are well known and popular, but for one reason or another, we haven't been able to attended the last few years.  A little research revealed one of the best events is held a few hours outside London, in a town called Battle in East Sussex.  Funny enough, the town itself was once known for its high quality gun power, so it's only fitting that it host a a grand celebration for a gun powder plot gone wrong.

One of the things that attracted us to Battle was the idea of a torch lit procession.  Most of the London events are just big crowds with fire works in one of the various parks.  Battle offered something a bit different.  And it didn't disappoint.  There must have been a couple hundred people, all dressed up in various costumes from the past 400 years, walking in a procession through city center carrying old time torches.  Others pulled trash cans with small fires that people kept tossing in fireworks that were always randomly exploding.

Now I have no idea what a burning at the stake would have been like, but I can't help think this wasn't far off.  Thousands of people lining the streets as a criminal, in this case a fake Guy Fawkes, was paraded through the streets by angry vigilantes carrying fire lit torches, screaming for bloody murder.  Add in a grey haze with a light mist and you have a seriously eery night only fitting to celebrate an evil plot gone wrong.

Here is a quick video to give you an idea of the night.


Once the torches were put out, the crowd moved to the green where a huge bon fire was set up with an effigy of the infamous Guy Fawkes on top - seen above.  Up in flames he went to the delight of the crowd, before the fire works were set off to end the festivities.   This was all just in time for us to grab the last train back to London smelling of torches and fireworks.  Luckily Charring Cross was the last stop because we snoozed the entire way home! 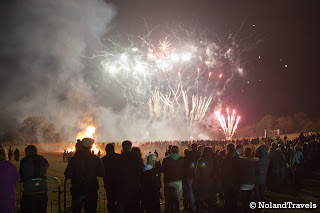 Bonfire nights are a must!  Rock!
Posted by Unknown at 5:27 PM