Spier And a Cheetah Encounter 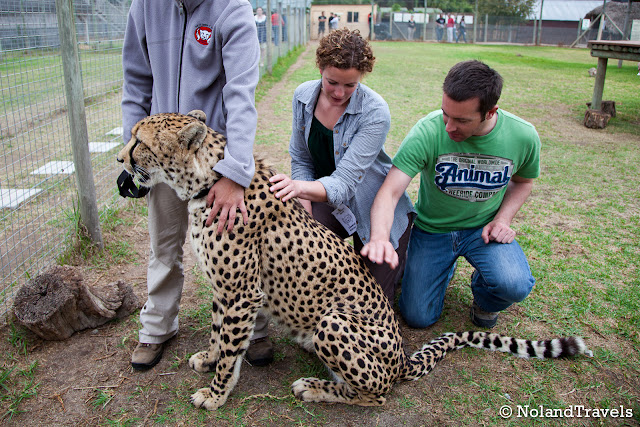 You are seeing it right, that is Steph and I petting a Cheetah!

With volunteering over, we had a few more days left in South Africa. For this part of the trip we hadn't planned anything ahead of time, hoping for some good recommendations once on the ground.  After talking over some suggestions with some of the crew from the boat, we opted to visit a wine retreat called Spier that has a Cheetah reserve on site! 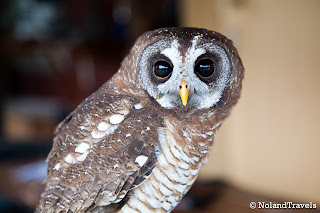 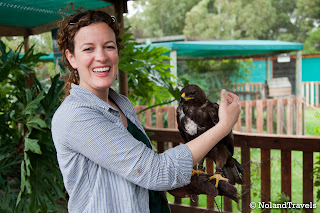 Picking up a cheap rental car from the airport we drove away but something just didn't feel right.  As we pulled on to the loop around the airport, merging into traffic, I hit the wind shield wipers instead of the turn signal.  Hang on what?  Then it hit me - this was the first time I'd driven a manual right-hand side drive car.  Adjusting to shifting with my left hand, all the controls reversed, was tricky at first but on we went with nervous Steph in the passenger seat.  She wasn't amused when I told her.  Anyway, despite using the windshield wipers instead of the turn signals the entire way, we made it to Spier without incident.

Set in the middle of the Stellenbosch region, Spier is just outside of Cape Town.  So besides wine and Cheetahs they also have a bird sanctuary that has numerous species of birds to see and hold.  Arriving as they opened, we had our pick of birds to hold which made for a few good photos.

The Cheetah reserve is actually called Cheetah Outreach.  Its a really smart program that is trying to tackle eduction in local communities to help the Cheetahs in two ways.  First they have started a dog breeding program that is working to introduce Turkish Anatolian Shepherd dogs into livestock herds to help prevent conflict between farmers and the endangered Cheetahs.  Basically the idea is that the farmers agree not to kill Cheetahs in return for the program placing one of their dogs into the heard for a year paying for all the vet bills.  After a year the farmer can keep the dog at their own expense or give it back.  It has been an extremely successful program reducing livestock loss from farmers participating in the program by 95%.  To fully understand this, you need to understand the cheetah - they are built for speed and agility, not conflict, so they only attack prey where there is little risk they will hurt themselves in the process.  So with a massive dog protecting the herd, the cheetah are discouraged from attacking.  This helps the farmers and helps the cheetahs - its an inspiring idea! 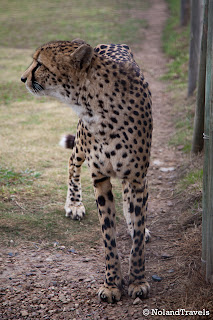 Beyond that, the outreach program also breeds Cheetahs in captivity.  They then train them to be social so they can take them to local schools and events allowing younger generations to interact with them and raise awareness.  This includes the reserve park itself where visitors can help support the program by giving donations in return for close encounters to pet the Cheetahs like we did above.

Getting up close and personal was absolutely amazing!  I just can't describe the raw excitement it brings out.  The cat we were able to see was named Phoenix.  It was just after feeding time so he was still happily purring away, staring into one of the other pens, allowing us to give him a few strokes across his back.  A genuine experience and honestly something we weren't expecting.  We told him about Mia & Gypsy in hopes of making friends but he didn't seem amused...

The rest of Spier was equally entertaining.  It was a large complex, almost like a little amusement park!  It had gardens to picnic in, shops, local artist tents, a singing and music and local food outdoor buffet dinner experience, a hotel amongst cottage houses and an excellent fine dining restaurant.  We enjoyed an aperitif at the outdoor dinner experience venue (imagine huge sheltering trees, tents, canopies, winding paths, tables tucked in little garden areas, tree houses, soft seating, fires and tiki lights - a lovely atmosphere!)  But we opted to have dinner in the hotel's restaurant where the food and service came highly recommended.  Besides, we were in South Africa - we wanted good 'ol fashioned steak!  Our fabulous steak dinner and bottle of Spier wine was far cheaper than any average night out in London - it was the perfect to meal to conclude our great day at Spier.

A few more photos
Posted by Unknown at 9:52 AM