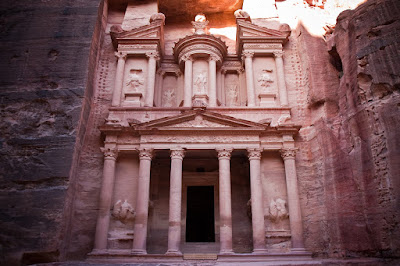 When we last left you in Jordan, we had just dozed off under the stars in our desert camp. Warm and cozy, we slept through the night, no street light peaking through the windows, no horns honking or garbage trucks banging around. However there wasn’t any sleeping in because at day break the morning light hits you like your alarm. As the sun gently rose, warming the dessert, we were tossing and turning wishing we could close the curtains to get an extra few hours of shuteye. Not today because our Bedouin hosts starting making breakfast and so we were up. We packed up our things, ate breakfast then headed out on one last jeep safari to exit Wadi Rum. 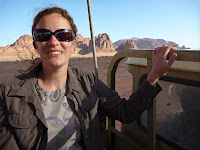 However we did hit one bump in the road. I woke up feeling fully sick; the night before I could feel it coming. Headache, fever, the works! Not good! It was so bad that I wasn’t even up for riding in the back of one of the open air trucks. I opted for the normal safari jeep while the others piled in the back of an open air truck to get one last dusty view of the amazing landscape.

Up next, one of the highlights of the entire trip, PETRA!

In Petra, our hotel rooms weren’t available yet so I had to beg to get a bed because I wasn’t going anywhere else. As the group took off for a mid day excursion into the valley that is Petra I was already in bed asleep. 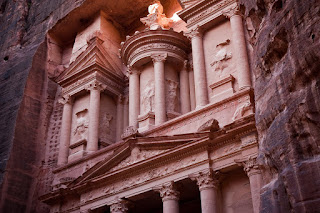 We have traveled a lot and this is really the first time either one of us has been sick. Thanks to our tour itinerary, we had two days in Petra, so it was an easy decision to just hit the sack and let my body fight whatever bug it had. So a little sleep and hopefully tomorrow I’d be ready to rock Petra! Fortunately, Steph paid close attention to all that the tour guide was saying and she became my unofficial tour guide the next day!

With me down and out, Steph also took the opportunity to visit a Turkish bath after her Petra tour. I know, I know, we aren’t in Turkey but she said it was relaxing and topped off with a nice tea afterwards.

Oh, one random note – while I was writing the blog I put Petra into Google maps and it took me to Kentucky! Funny enough we have a Petra in Eastern Kentucky, I’m not joking check it out. I think Google might need to tweak their Petra map search.
Posted by Unknown at 6:07 PM