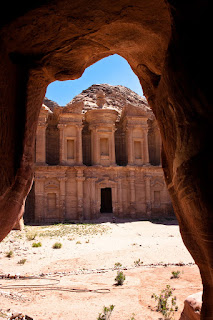 To start this day I need to give a big shout out to one of our fellow travelers, Chris, who being a doctor, came prepared with medicine to fight certain travel sicknesses such as mine. A few doses of medicine and I was back on my feet, although not a full 100%, but there was no way I missing Petra.

Now a little background on Petra - there is more than just the Treasury.  You know the one that was featured in the Indiana Jones movie that I posted a picture of yesterday.  It’s an entire ancient city carved out of the sandstone rock face of those eerie gorges. In ancient times it was a major part of the camel caravan network mainly because they were smart enough to build an aqueduct system to control the water. Locals lived in the carved out city even up until the 1980’s! Today there is still a lot to see including the theater, monastery, temples, royal tombs, street of facades and of course the Treasury.

After entering the gates you pass by some tombs until you reach the tall split in the sandstone where the fun really starts. Anticipation builds as you walk down the narrow gorge with its tall sandstone cliffs because after every bend could be the infamous Treasury. And then, all of a sudden, there it was, such a monumental site! Carved out of the sandstone it welcomes you to Petra.

Now for anybody thinking of visiting, the park opens early and it is an absolute must to get there early! You literally can have the place to yourself.  The peaceful walk through the gorge is a nice highlight.  Later in the day the heat and the crowds can be overwhelming, as Steph can vouch for having seen Petra the day before at 3pm!

After a good photo session, we headed off to find the monastery at what’s known as the high place of sacrifice. We wanted to make the 800 steps climb before the heat of the day set in. The climb wasn’t all that bad because there were steps carved out of the stone to walk on.  However, we were at times being passed my the more leisurely tourists who opted to take a donkey up the steps! 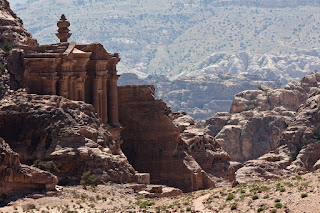 At the top you go down a few steps then look off to your right where the monastery leaps out of the rock face.  It is in similar style to the Treasury with columns and carvings but much bigger. The doorway is several stories high!  I have to say that it rivals the Treasury for top attraction in Petra.

We met some of our group at the top and all decided we had to go inside the monastery. It’s not easy to get in because the door sits about shoulder level high. So with a little bit of brute force manpower, I hoisted myself up and in (also inflicting the first true scratch on our waterproof/indestructible camera - it survived!). From there I could help pull the other group members up. We did a group photo before heading out. Yep you guessed it, another jumping photo. We found out later that they discourage people going inside when we heard others being told not to enter!

On top of the mountain we did some more sight seeing and found a sign that pointed to the “End of the World”. That peaked our interest so we hiked to the viewpoint where, as far as views go, this could have been the end of the world. Nothing but wide-open desert and mountains as far as you could see. So, at the end of the world and no further to go we decided to enjoy the view and have a mid morning snack - the Jordanian equivalent to Fig Newtons!

After a hike down we stopped to admire the amazing mosaics - partly because they were under cover and it was starting to hear up. We then headed to have lunch in one of the many carved out tombs/rooms in the cliffs along the street of facades. High up in the cliffs we sat cooling off just taking in the views devouring our lunch of pita, hummus, cheese, fruit and juice. The scenery in Petra is amazing. The ruggedness and colors of the sandstone - breathtaking! Adding on the fact that everything is carved out of stone instead of being built, that firmly establishes Petra as a must see!

We casually made our way out of the park (an entire gradual uphill walk - ugh). But we weren't so tired when we got to the top that Steph didn't want to shop. She had eyed some belly dancers costumes over the past couple days (as they have loads of shops at the entrance to the park), so we haggled to purchase her next Halloween costume - a UK blue belly dancer costume, fully beaded and sparkly, for a steal!

Back at the hotel, after a bit of a rest, we hit the roof for a sunset which can only be described as a Hollywood film set. It was so surreal that it looked fake. What a way to end such an epic day in this Wonder of the World! 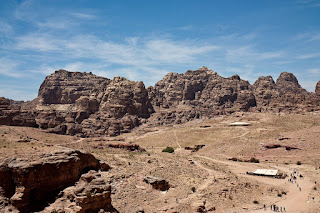