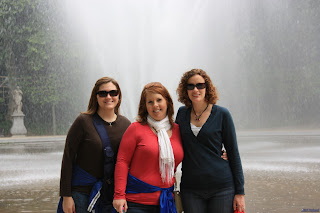 Erin and Melissa were in town and stayed with us for a few days before we all headed off to Belgium for the weekend.

First off we want to say hi to our newest friend Cliff, who is the midst of a 10 week trek through Europe for a little self rediscovery. We had a good time touring with him in Brussels and wish him the best of travels.

Now, while in Belgium we just had to have our share of waffles and chocolate along with seeing the sites. And we did.

Chocolate shops were everywhere which gave the girls too much opportunity to ogle over all the different types (try and find the funny chocolate shape in that photo). They tasted quite a few different varieties and types but it wasn't enough.

Oh and the waffles, dang, they were tasty! They aren't your average waffles. No, they are waffles covered in a light coating of sugar then topped with your favorite topping like chocolate or strawberries or brown sugar or whipped cream or all of it!

While we were in Brussels there was a Jazz festival in the Grand Palace square. It was really nice after a day of touring to sit back in the square and relax with Jazz in the background. Here's a better photo of the square.

Among other things we also saw the comic strip museum which was interesting. Heres a good photo of the girls posing with an adverts for the museum.

One thing to note about Brussels is there aren't many high profile sights like you see in other European cities but there is Manneken Pis. He's a bit rude and a bit obnoxious but what a laugh as he takes a wee into the fountain below. He's a big hit and lots of time they dress him up as we were able to see. That little guy made my trip to Brussels. He's so entertaining.

On Sunday we hopped on the train we took a trip to nearby and picturesque Bruges. We had a picnic for lunch, then took small boat ride which gave us a great way to see step gable houses set on the canals. We found one happy dog lounging out his window over the canal. If you get to Brussels, Bruges is worth a visit.

Finally we headed back to London and Erin and Melissa headed off to Paris continuing with their trip. Happy travelling!
Posted by Unknown at 12:52 PM