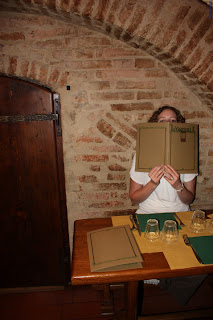 Sorry for the duplicate post. I mistakenly hit the send button before I was finished. Here's the revised post...

Before too much more time gets away let me wrap up our Tuscany adventures.

So after the bike ride we toured Florence seeing most of the main attractions such as the Duomo and most importantly Michelangelo's David. We stood there with everybody else, mouth half open, staring just waiting for him to gracefully switch his weight to the other leg and look the opposite direction. He is awe inspiring!

Next we picked up our rental car which couldn't have come at a better time. We were starting to get a bit weary of the over touristy cities, which Florence takes the cake. Taking advice from our Bologna friends we drove to a small town called Sangimino where we had a lovely after noon strolling around the quite streets, up and down the hills.

Oh the drive out of Florence was an insanely hectic experience. It took both of us to drive. I was trying to navigate the roads and Steph was telling me where to go that went something like this. SN, "Take the 3rd exit, NO the 3rd exit!" JN, "I can't, too many cars too little road, ah"! SN: "Oh no, look out for the dude the moped". It was a stressful few minutes getting outside the city but worth it.

Anyway, the city of Sangimino sits high up on a hill and we found a nice walking path around the outside of the city wall that offered some good views.

We ended the night in Siena which has competed with Florence for power over the centuries. Most people usually like one of the two cities better than the other. We sit on the Siena side. They have an impressive square that is shaped like a big bowl which was a great spot to take a break.

Finally at dinner we had a bit of a surprise. We settled on this little place recommended by a few of the travel books. The menu was in Italian which made it challenging to order so we ended up having to asking the server for advice. I chose a pasta beef dish which the server described as "part of the rib". Right, so after eating a few bites and not letting on how bad it was I had Steph try a bite. Yuk! Even now we are not sure what it was but it sure did kill both of our appetites. My guess, stomach? Fear Factor anyone...

The photo above is Steph at dinner before the incident when she was in a better mood...

Here's a link to the Italy Photo Collection
Posted by Unknown at 7:15 AM