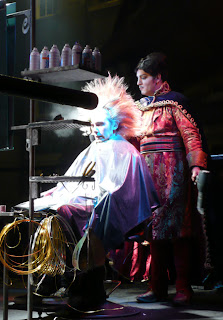 By the time we arrived, Edinburgh was already decked out for the Hogmanay celebration with Princes Street closed to traffic and workers everywhere finishing the last minute touches. There was a massive stage at the foot of the castle with a few other minor stages on surrounding streets. There were also a lot of carnival rides decorating the city center.

For us the festivities began on the night of the 30th. Georges Street was closed for a street party full of singing, dancing and other performing arts. One of the most amusing was a pair of non-talking, costumed hairdressers who were making creative masterpieces of peoples' hair. They would silently point to someone in the crowd to come on stage. Then they underwent a hair transformation, most resembling Dr. Seuss styled hair, complete with color spray, hair glitter, pipe cleaners and an assortment of plastic dinosaurs that were wired into the hair.

One impressive style included someones hair turning in to the red and green dinosaur that killed Seinfeld's "Newman" character (remember, when he was running away with the dino DNA, and this little dino looked innocent until he flipped up his bright red and green collar and started hissing?!) Yes, this guy's long hair was transformed into this dino! And topped with a little plastic figurine of the same dino for effect (in case you didn't recognise it!). I tried to get on stage but I am guessing my hair was too short as these styles were mile high and outrageous!

New Years Eve was no less exciting. The street was packed and as it got closer to time you were essentially a sardine on the street! Initially we planned to make our way over to the stage where the Red Hot Chili Pipers were playing. Yes, bag pipe rock! Don't believe me check out this video. Unfortunately navigating the crowd took longer than expected so we just got in to a good position to watch the fireworks.

Amazingly, there was no big announcement or countdown...we heard the crowd start a half-hearted countdown around 5 seconds before - and then the castle went up in a glitter of fireworks! The show was nice but short. And like most public celebrations, the crowd dispersed to the bars, clubs and pubs fairly quickly.

As large as the celebration seemed, we found out that about 100K people attend Hogmanay whereas about 1 million attend NYC! Regardless of the relative size of the event, we had a blast and it was a great way to welcome in the new year and celebrate being another year wiser.
Posted by Unknown at 7:37 AM