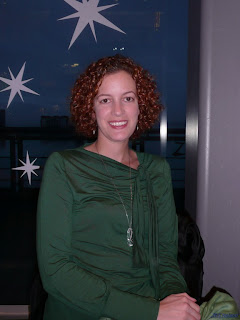 After a whirlwind trip to the US for Christmas we flew back to London, lugged our suitcases full of gifts home, greeted the cats, took a much needed nap (I know it's bad for jet lag but it couldn't be helped), spent the evening unpacking and repacking and flew out the next morning at 7 am. Between the overnight flight back to the UK and the short nights sleep it was a quick few days.

The trip to Edinburgh was marked by two occasions, my birthday and New Years Eve, also known as Hogmanay in Scotland.

The first thing that strikes you about Edinburgh is the castle sitting up on the hill. A dominating presence overlooking the rather historic but modern and hip city. Standing on Princes Street all you want to do is gaze and take pictures of it. It has such old world charm and is still in impressive form. In its day you just know it was a formidable challenge for any opposition standing down below. "Go on lads, try and take that castle..."

After checking into Rick's our boutique hotel and dropping off our luggage we headed toward the castle to start sightseeing. One time saving note for future travellers, if you are in city center wanting to visit the castle just start walking up the hill. Don't try and find a bus that will take you close because they do not take you that close from there as one driver thankfully pointed out. Its only a 5 min walk albeit up the hill.

From the castle you are struck by a great view from the top. Even though parts date back to the 9th century most of its structures date from 16th century forward except for one chapel from the 12th century. Keeping with our celebration theme we watched the new years fireworks display being set up on the tour.

Check out Josh in the castle and with another huge cannon called Mons Meg.

Afterwards we started a conversation with a Scottish whiskey salesman when I was looking at a bottle of whiskey as old as we are (1980!). He pointed out the Whiskey Bible (rating book for the world's whiskeys) and he was telling us one was highly rated. Josh flipped through quickly and found that KY bourbon Woodford Reserve was the same high rating. Proud of our KY heritage, we thanked him and moved on.

Leading up to the castle is The Royal Mile lined with interesting shops and pubs (AKA - tourist traps). Anyone for a kilt?

We tried to visit The Royal Yacht Britannia. Its located on the outskirts of the city at the Ocean Terminal so after a bus ride there it had already closed due to it being new years eve. Instead we had a nice lunch for my birthday where we got the lovely picture above.

So much for sightseeing - its time for the next celebration, Hogmanay...
Posted by Unknown at 5:24 AM