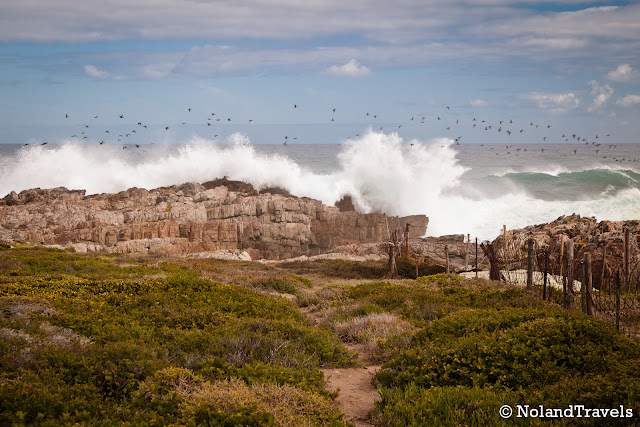 Just down the road from the volunteer house was a place called Danger Point.  For some reason every time we drove past the sign I just had to mutter, "Daaaannnger!" in a low tone to myself.  So, you know us, that's all the reason we needed to go find out what was so dangerous.

With a name like Danger Point you imagine there is a story that goes along with it.  Well there is.  Back in 1852, the HMS Birkenhead carrying troops and other passengers wrecked on a rock out from the point.  As the ship was going down, the captain, as was customary, yelled "every man for himself"!  However, the British soldiers, true to form, lined up according to rank and stood still.  They were concerned that if one man broke rank then the boats with women and children may be compromised.  The result was that 445 men died that day.  The men stood fast allowing the women and children to get away safely.  This lead to the infamous, "Women and children first" call when abandoning ship, The Birkenhead Drill.

The point itself is named aptly from the 140 or so ships that have wrecked here.  A light house was eventually installed to help the ships navigate the waters.  While we were there the sea was incredibly rough and the waves crashing into the point only enhanced the mystic of this bit of coastline.  I was sure glad I was on dry land and not onboard a ship.

Check out this weird little foam circle we found nearby.  We had no idea what it was but watching it wiggle was odd.