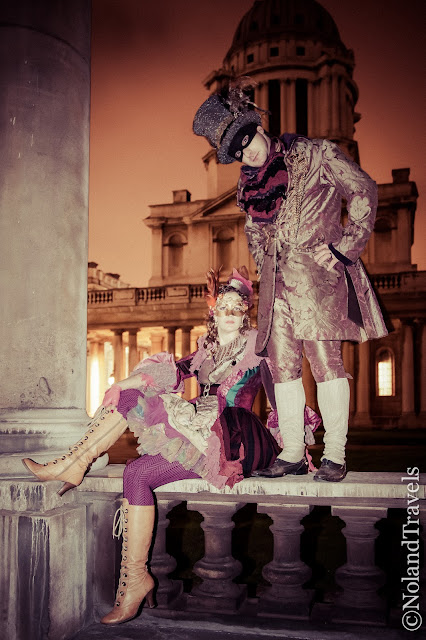 We very often schedule our trips during important festivals or events and as we were entering our fifth year living in the UK I had one event still in mind - Venice Carnivale!  I love Halloween and costumes, so its no surprise that one of the most famous masked ball events in the world caught my eye.

The plan: Book tickets to an authentic masked ball at the At Home a Palazzo, a beautiful 14th century palace during Carnivale.  Once that was done we'd have no choice but to get some costumes!

With the tickets booked there were two options for costumes.  Rent them in Venice at a price of around 299 euros or rent them in London at a much cheaper price but pack them to Venice.  We opted for the latter to make sure we got good costumes at an affordable price.  Plus, I thought I could temp Josh into a photo shoot before we left to get even more use out of our costumes - he loved it.  We picked them up a few days before we left so I suggested we head out for a nighttime photo shoot, in costume, at the Old Royal Naval College in Greenwich - a stunning setting!  One of our friends, Miguel, who is also an avid photographer, agreed to be our photographer for the night.

So we hit the town on a bitterly cold London February night but the outcome was well worth it! Thanks Miguel! 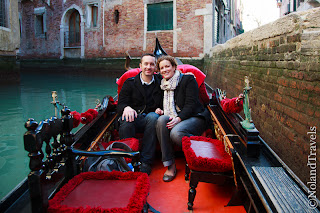 With our practice round behind us, we headed off Friday night for a quick weekend away in Venice.  Our B&B, Al Doge Beato, was tucked away in a quite alley in the middle of Venice.  It was from this location that we took our first gondola ride (I know, I know - we've been three times and never taken a gondola).  There was also a wonderful quiet courtyard around the corner, right on a canal with a great restaurant.  Our weekend had really started as a picturesque visit to one of the most romantic cities in the world - and we still had the masked ball to look forward to! 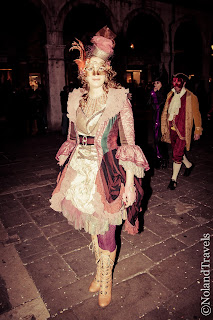 So, as the sun began to fall in the sky, more and more people were emerging in full carnivale gear so we headed back to the hotel to don our costumes and enjoy to revelry.

We had no particular plans other than to head towards to the Rialto bridge and slowly make our way towards our ball.  And, if you've ever been to Venice, you know that getting around through the narrow, zig zag alleys, bridges and walkways can be time consuming and very often end in being lost!  But on this particular night, it didn't matter - the streets were alive with people in costume and you just had to follow the crowd!  We were taking pictures of others and people in turn, stopped us for our picture.  We even stopped in for some Italian espresso to ensure we were well awake for the night ahead. 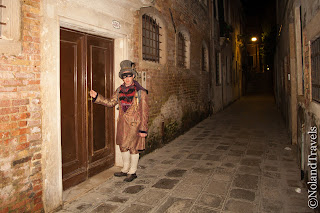 After a couple hours of roaming the street parties, we needed to head towards our ball...and that proved difficult.  While I was sure to print a map with directions and street names, no matter how much you prepare things go wrong in getting around in Venice.  Streets aren't labeled, scale is off, additional alleys and streets not on the map are in front of you and you ultimately have to wing it. 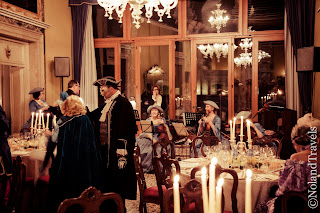 The further we walked, the quieter the alleys got - we were clearly away from the main crowds now and had no clue where we were.  Thanks to a couple helpful Venetian men, who couldn't speak English but knew the address on our paper, they walked us straight to our palace door.  We were extremely grateful because we might not have noticed the discrete door ourselves.

It was surreal entering that discrete door in the dark alley, because upon entering the large entry hall you were transferred in to a parallel world - something out of centuries past!  Red carpets, heavy curtains, chandeliers, a live quartet and people decked out in the most glamorous costumes imaginable!

In hind sight we realized we missed a trick.  We should have taken a water taxi or gondola.  When we arrived a stream of guests were being dropped off by boat.  It felt like a much more appropriate entrance to a ball in Venice plus we wouldn't have been lost.  Oh well, maybe next time.

The ball itself was a dinner and dancing event so we spent the night meeting fellow travellers, dining on delicious food and admiring the surroundings!  The wives of the two French families at our table had actually made their costumes by hand.  Others had hired the costumes in town.  And most people we met were first time attendees.

After a long night of enjoying the magical world, we made our way back to our B&B (again, after a few wrong turns...).  The next day, we enjoyed the neighborhood around our peaceful B&B, ate at the fantastic courtyard restaurant again and then strolled St. Mark's Square where you could photograph and admire some of the most detailed and/or authentic costumed people.  We then reluctantly packed away our costumes and headed back to London with the great memories of having attended Venice Carnivale! 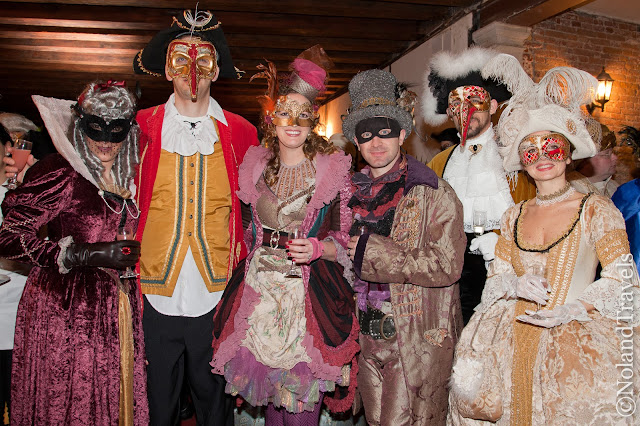