Climb to the old Tordi Fortress 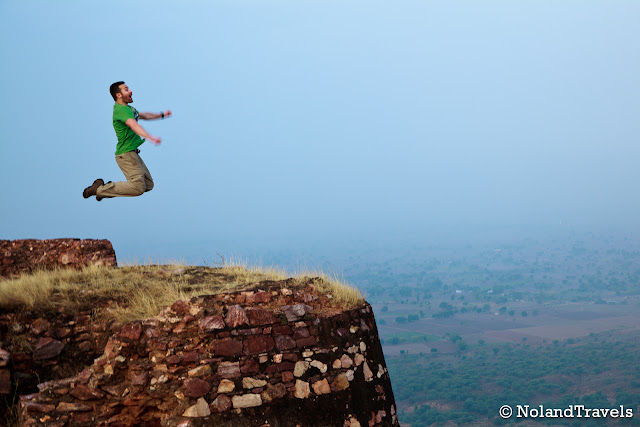 Up before sunrise, Ben and I had arranged to climb up the hill to see the old fortress where the Prince's grandfather used to live. Our guide and one of the Prince's workers, Raj, went with us to make sure we didn't get lost.  Raj was awesome - leading us up the hill in sandals pictured below. 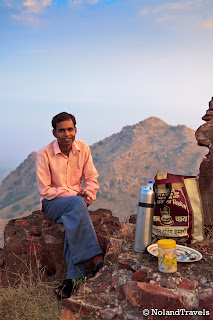 Winding up the hill on small little trails, it only took about 25 minutes to climb.  Its hard to imagine servants back in the day packing supplies up and down.  Its a long way to go if you run out of milk!  Once at the top, the views were good although the fog was a problem.  As the sun came up we were welcomed to the day with a spot of tea, thanks to Raj for packing it up the hill.  The fortress itself isn't in very good shape so there isn't much to see but we did hear stories about its past including a hidden treasure.  We had a quick look for secret passages but didn't find anything.  So instead we took turns jumping for photos on the turret hanging off the cliff overlooking the country side below.  Watch your step...

On the way down we ran into 3 boys playing with a homemade bow and arrow. We introduced ourselves and shook hands and then they offered us a chance to shoot their bow and arrow as they looked on in enjoyment. Its amazing what can be entertaining at certain times. 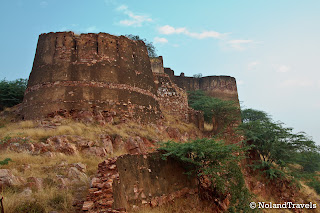 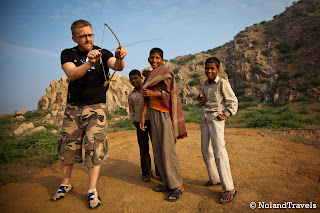 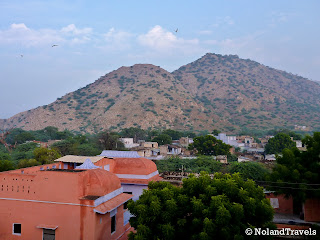 At the bottom of the hill...

...I (Steph) couldn't help waking early as we had all gone to bed shortly after dinner last night.  The morning was quiet and cool and I was anxious to see what everyone in the village was up to - so I went up to the roof top terrace.  It wasn't long before the Prince came by and we started talking.  I mentioned that Josh was climbing the hill so he suggested we head up to the upper roof terrace (yes, there was another one!)  and he went to grab his binoculars to have a look.

While we were looking for the guys on the hill, we talked about all sorts of things.  He has about 8-9 farms, growing things such as mustard and veggies.  He also talked about the large reservoir that fills up during the rainy season and is usually dry by the end of the dry season...and its only used for irrigation.  The rain that came yesterday afternoon was unseasonal but well received as it meant less reservoir water would have to be used, in the short term, for the local crops.  He also talked about his love of horses and that he had just been the famous Puskar camel and horse fair.

After a while, we finally saw some movement on the hill and we spotted them on their way down just in time for breakfast.

I think Josh and I can both say it was a lovely morning in Tordi!
Posted by Unknown at 3:00 AM